Paul Sekfy returned to his property to find his two sheds destroyed but his house still standing with the note inside.

While working to combat the raging wildfires that have been tearing across New South Wales, firefighters from the Urungu Rural Fire Service popped into one of the homes they were working to save in search of some much-needed sustenance.

After taking a few things from the refrigerator, Kale Hardie-Porter, one of the firefighters, left a note.

"It was our pleasure to save your house. Sorry that we could not save your sheds," it read. "P.S. We owe you some milk." 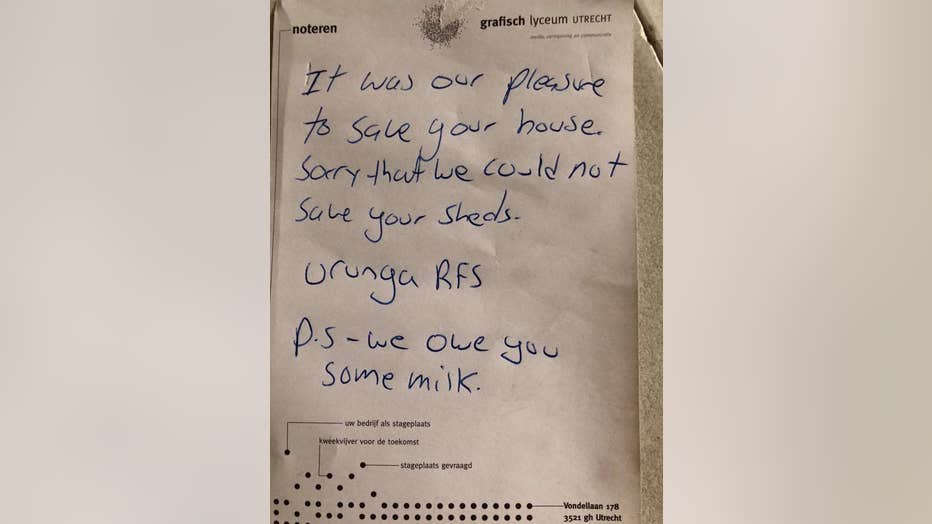 Paul Sekfy returned to his property to find his two sheds destroyed but his house still standing with the note from Hardie-Porter inside.

Moved by Hardie-Porter’s gesture, Sekfy posted a picture of the note on Facebook with the caption, “The best note on my kitchen bench since the morning after my wedding.”

The post has since been shared more than 5,000 times, eventually making its way to Hardie-Porter, who commented, “You have made my day! I’m happy to know that my note got to you in one piece.”

Sekfy, who is living in a motel while his home remains uninhabitable, told CNN, “They don’t have to pay back the milk, I’ll just sort them a couple cases of beer.”

The fire that threatened Sekfy’s home tore through the region at the end of last week, but the infernos have continued to wreak havoc across one of Australia’s most populous regions.

About 60 fires were burning around New South Wales on Thursday morning, with 27 uncontained while being battled by more than 1,000 firefighters, the Rural Fire Service said.

"We had a better day yesterday, only one fire got to emergency warning, but even in these pretty benign conditions we're seeing quite a lot of aggressive fire behavior simply because it's so dry," Rural Fire Service Deputy Commissioner Rob Rogers told the Seven Network television.

"Conditions starting to warm up tomorrow, into the weekend and then heating up early next week, a return to more gusty conditions. We're in for the long haul," he added.

At least 50 homes were damaged or destroyed in New South Wales on Tuesday by wildfires that had burnt into the suburbs of Sydney, Australia’s largest city.

A week-long state of emergency was declared for New South Wales because of the extraordinary fire danger. The emergency declaration gives the Rural Fire Service sweeping powers to control resources and direct other government agencies.

The annual Australian fire season, which peaks during the Southern Hemisphere summer, has started early after an unusually warm and dry winter.