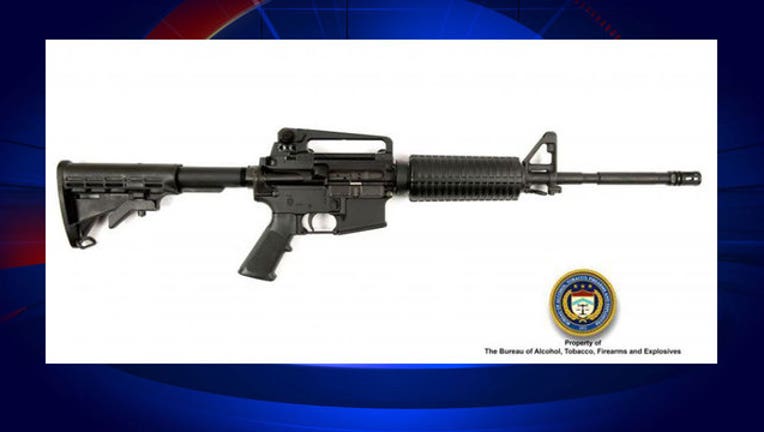 ATLANTA (AP) — Karen Butler still remembers the first time she picked up an AR-15-style rifle a decade ago.

"Quite honestly, I was scared of it," she recalls.

But as soon as she fired it, she became a fan.

"You know some of these people that are fearful, it's just because they don't have knowledge," she said. "We call it furniture — it's got all the accessories on it that make it look a little intimidating. But once you shoot it you realize it's so much fun."

Butler, of Huntsville, Alabama, started Shoot Like a Girl, an outfit that seeks to introduce and inspire women to participate in shooting sports.

An estimated 8 million AR-style guns have been sold since they were first introduced to the public in the 1960s, and about half of them are owned by current or former members of the military or law enforcement, according to the National Shooting Sports Foundation, which represents gunmakers.

Even the name stirs up controversy. "AR" does not stand for "assault rifle," as many believe, but for ArmaLite Rifle, a nod to the company that first designed it for military use. Assault rifles are fully automatic; the bullets keep flying for as long as the trigger is depressed. AR-style guns are semi-automatic, meaning the trigger has to be pulled separately for each shot.

More than 12,000 people were killed last year in the United States by guns, and most of those incidents involved handguns. A tiny fraction involved an AR-style gun. But of those, most have been high-profile shootings, including the nightclub shooting in Orlando, Florida, where Omar Mateen used a Sig Sauer MCX model in an attack that killed 49 people.

That shooting has revived calls for banning ARs among critics who believe it is too powerful and too deadly, with standard magazines that hold 20 to 30 rounds, compared with handguns that generally hold nine to 15 rounds.

Democratic presidential candidate Hillary Clinton has called for reinstating a ban that expired in 2004. "We have to make it harder for people who should not have those weapons of war," she said the day after June 12 shooting.

For Dara Humphries, the AR-style firearm isn't to be feared, scorned or banned. Rather, she says, it's just a different type of weapon with a different feel.

"It's like driving a truck versus driving a car, a sports car. Every firearm has a different feel to it," said Humphries, an NRA instructor based in Georgia. "So a Ruger Mini 14 may feel like a Jaguar to you and may feel like a truck to me and vice versa. And to me an AR-15 feels like a smooth ride whereas a Ruger feels like a bumpy truck."

Humphries, who also goes by the nickname Tactical Barbie, believes the debate over gun measures has focused too much on the firearm and not enough on the person behind the gun.

"Normal people who purchase guns don't do this," she said of mass shooters. "If I want to defend my home and my family then I have the right to do that. We're legal gun owners who aren't out there shooting people up."

Erich Pratt, executive director of Gun Owners of America, says the AR-style firearm is easy to use, has little recoil and can be customized, such as with a collapsible stock, making it easier for women to handle.

While it's too large to carry concealed, he and others describe it as a good weapon for home defense or in other crises.

"When you're facing multiple attackers, you want something that will shoot more than six rounds," Pratt said.

He and others in the gun lobby say the AR is targeted because of the way it looks, and any fears are misplaced because it's only cosmetically different from other types of rifles and long guns.

Kevin Michalowski, executive editor of Concealed Carry magazine, first fired an AR-15 in the early 1990s while hunting coyotes in South Dakota. He found it easier to use and more accurate than his old bolt-action rifle.

While you can "do all kinds of cool things" with the AR — adding a scope or optics, putting a flashlight on the barrel, changing the stock — "none of this stuff makes a firearm any more deadly," Michalowski said.

For Shoot Like a Girl's Butler, shooting was inspiring. After a divorce in her 30s that undermined her confidence, she went to the shooting range with a group of friends. She started shooting at Gatorade bottles and by the end of the day was using bottle caps as targets.

"I went in there feeling like a failure in life and I walked out having this renewed confidence," said Butler, 49.

Butler said she believes the anger directed at the AR is unfair and misdirected. "It's a shame because we don't have the same outcry over knives, over baseball bats, over texting and driving, over all of these other things that are killing Americans every single day," she said.