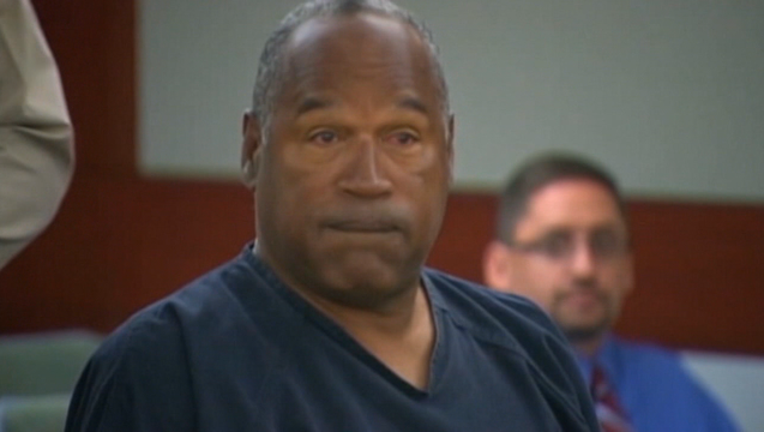 LOVELOCK, Nev. (AP) - Former football star and convicted felon O.J. Simpson will command the world's attention once again Thursday when he pleads for his freedom on live TV.

Simpson was convicted in 2008 of an armed robbery involving two sports memorabilia dealers in a Las Vegas hotel room. The 70-year-old will ask four parole board members to release him in October after serving the minimum nine years of a 33-year sentence.

An aging Simpson will appear as inmate No. 1027820, dressed in blue jeans and a blue button-down shirt, in a stark hearing room in a remote Nevada prison.

Simpson was convicted of enlisting some men he barely knew, including two who had guns, to retrieve from two sports collectibles sellers some items that Simpson said were stolen from him a decade earlier.

"My crime was trying to retrieve for my family my own property," Simpson told the parole officials in 2013 before apologizing.

"Make no mistake, I would give it all back," he said, "to get these last five years back."

The robbery was a new low for Simpson, whose celebrity spanned sports, movies, television and advertising before his fall from grace during his highly-publicized murder trial in 1995.

Simpson was found not guilty in the killings of his ex-wife, Nicole Brown Simpson, and her friend Ronald Goldman. In 1997, he was found liable in civil court for the deaths and ordered to pay $33.5 million to survivors including his children and the Goldman family.

The Goldmans believe Simpson got away with murder in Los Angeles, and many people felt the stiff sentence handed down in Las Vegas wasn't just about the robbery.

A Goldman family spokesman said Ron Goldman's father and sister, Fred and Kim, won't be part of Simpson's parole hearing but feel apprehensive about "how this will change their lives again should Simpson be released."

The retired district attorney who prosecuted Simpson for the heist denied Simpson's sentence was "payback" for his acquittal in the Los Angeles slayings.

David Roger said Simpson took a gamble when he rejected an offer to avoid trial by pleading guilty to a felony that could have gotten him 2½ years in prison.

"He thought he was invincible, and he rolled the dice," Roger said.

However, Roger acknowledges that Simpson has a good chance to go free.

By most accounts, Simpson has a clean prison record and a good chance for release.

Simpson is expected to reiterate that he has kept a promise to stay out of trouble, coaches in the prison gym where he works and counsels other inmates.

"I guess, my age, guys come to me," Simpson told parole officials four years ago.

The same commissioners granted him parole during his last public appearance in 2013 on some of his 12 charges, leaving him with four years to serve before reaching his minimum term.

At Simpson's side in his bid for freedom will be lawyer Malcolm LaVergne, close friend Tom Scotto, sister Shirley Baker and daughter Arnelle Simpson.

O.J. Simpson is expected to explain what he would do and where he would live if he is granted parole.