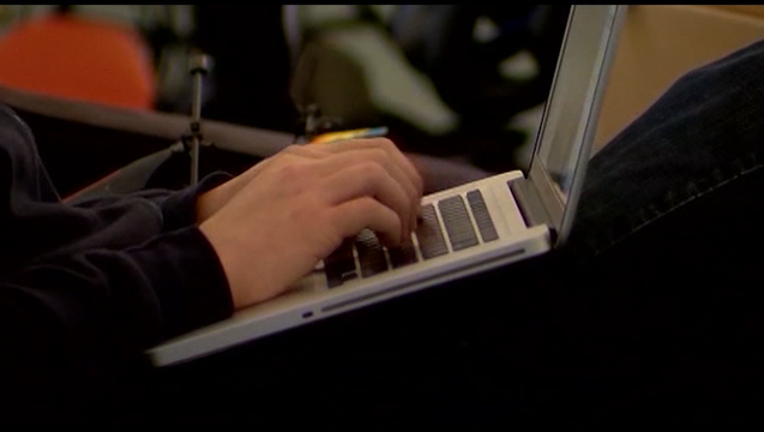 DALLAS (AP) - A new security measure banning many electronic devices on flights from 10 mostly Muslim countries is leading travelers to reconsider their plans to fly through some airports in the Middle East and Africa.

Paula Berger, an energy-company manager, and a co-worker have tickets to fly from the U.S. through Dubai to Hyderabad, India, where her company has an office.

The new rules would require Berger to surrender the laptop she carries and put it in checked baggage on the return trip next month. She is worried the device could be stolen.

"I've been spending hours this morning trying to find a way to reroute us without it costing $5,000, but I haven't found anything," Berger said Tuesday. "We might have to suck it up and go through Dubai."

The U.S. and British governments, citing unspecified threats and attacks against airliners and airports over the past two years, announced Tuesday they are barring passengers from airports in 10 countries from bringing laptops, tablets, cameras and other devices on board in carry-on bags. Only cellphones and medical devices will be allowed in the passenger cabins.

The orders are a concern for business travelers, journalists and other professionals who work on the devices and use them to store sensitive information. Tourism officials worry that the orders could heighten people's fears of an attack and discourage them from traveling.

Jonathan Grella, an executive vice president for the U.S. Travel Association, said he hopes that the government is trying to make travel more secure, not to suppress it, and that the U.S. still welcomes business and leisure visitors.

Analysts said some travelers who want to keep their devices with them will switch to flights that reach the U.S. from Europe or Asia, even if it means an extra connection.

For business travelers, the ban on laptops in the cabin "is a potential productivity killer," said Robert Mann, an aviation consultant in Port Washington, New York. "If you were planning to work on the flight, you've just burned 14 hours of your day."

Henry Harteveldt, a travel analyst in San Francisco, said some companies forbid employees from putting expensive company property such as laptops in checked bags, where theft is always a risk.

Making matters worse for passengers, most airlines say in their policies that they don't cover or they limit compensation for expensive items such as electronics that are placed in checked bags.

Naureen Shah, Senior Director of Campaigns at Amnesty International USA, warned that the orders pose risks to journalists and human rights advocates, "who will be forced to hand over laptops and devices containing sensitive information, potentially compromising their sources."

A senior administration official said the U.S. would not go after data on passengers' devices.

If U.S. the security measure causes passengers to fly home through Europe, the beneficiaries are likely to be U.S. airlines or their European partners, who operate many flights to the U.S. from London, Paris, Frankfurt, Amsterdam and other transportation hubs.

U.S. government officials say their order will affect about 50 flights a day - there are about 2,100 airline flights to the U.S. each day, according to the Department of Transportation. More than half of the affected flights are operated by three Middle Eastern carriers: Emirates, Qatar Airways and Etihad Airways. They are growing rapidly and adding new destinations in the U.S. from the United Arab Emirates and Qatar, two of the countries covered by the electronics measure.

All three have built their business on routing long-haul international traffic through their desert hubs rather than relying on the smaller local markets. And they are big buyers of Boeing and Airbus planes.

Etihad passengers at Abu Dhabi International Airport in the United Arab Emirates go through a passport-inspection facility staffed by U.S. Customs and Border Protection agents - the only one of its kind in the Middle East - allowing them to arrive in the U.S. as if they were on a domestic flight. That arrangement, however, was not enough to spare the airport from being covered by the new security measure.

The security order comes as the biggest three U.S. airlines - American, Delta and United - lobby the Trump administration to crack down on those Middle Eastern rivals, whom the U.S. carriers accuse of getting unfair subsidies from their governments that let them undercut U.S. airlines on fares.

A senior U.S. government official told reporters the security order was not related to the dispute.

"It may not have been directed at the three Gulf airlines, but there will be collateral damage to those carriers," Harteveldt said. "The question is how much."

For now, the Gulf airlines are not protesting publicly. But if the security measure drives customers away, Harteveldt said they could retaliate by canceling orders to buy U.S.-made planes from Boeing Co.

Russ Bynum in Savannah, Georgia, and Adam Schreck in Dubai contributed to this report.