Tampa wakes up after violent night

TAMPA, Fla. - Growing anger and unrest over the death of George Floyd in Minneapolis is now spilling into the streets of the Tampa Bay area. Protests took place on both sides of the bay, with the demonstration in Tampa turning violent overnight.

The destruction was centered around the Busch Gardens and the University Mall area. At one point, the Champs Sports store along Fowler Avenue was engulfed in flames.  That’s right across the street from the mall, where a crowd of protesters had gathered overnight.

Tampa Police Chief Brian Dugan said at least 40 businesses were burglarized and looted and five were set on fire. Plus, he said 27 police cars were vandalized.

Tampa police said they arrested 41 adults and juveniles throughout the night. Some of the juveniles arrested were wearing ankle bracelets. Chief Dugan said there would be a different tone on Sunday. He encouraged anyone who wants to protest peacefully to stay at home.

Two deputies responding to the protests were injured. Both suffered minor injuries and have since been released from the hospital. 15 HCSO vehicles were also damaged during yesterday's protests.

Tampa Mayor Jane Castor said she saw Saturday night was shameful and heartbreaking. “What I saw last night happens in other cities," Castor said during a press conference Sunday morning. "It does not happen in Tampa. We are better than that. We are Tampa strong.”

Earlier in the night, firefighters had their hands full battling flames that destroyed a Mobil gas station at at North 30th Street and Busch Boulevard.

Tampa Fire Rescue says police officers actually had to escort firefighters into the area because of reports of looting nearby. The state fire marshal is now investigating.

Video from SkyFOX showed groups of people smashing into retail stores along Fowler Avenue. That includes the CVS, an AT&T store, the Gold n' Diamonds jewelry store, and a few restaurants in the area.

The view from several locations where protests turned violent in the north Tampa area.

Sheriff Chad Chronister insisted violence and destruction will not be tolerated.  The sheriff's office says they've made multiple arrests.

At least two deputies are recovering after violent encounters at the mall. The sheriff's office says one deputy was hurt when fireworks struck his helmet and burned his arm; a second deputy was hurt after someone threw a "hard object" at the back of his head.

Both deputies were treated at the hospital.

At one point, deputies were using tear gas and rubber bullets to try to get the mall crowds under control.

Deputies use gas to try and disperse crowds that were allegedly trying to break into the mall.

“Tonight was one of the most tragic horrific nights you could ever imagine. Just seeing people come and destroy things instead of rebuilding it and just protesting and showing what we actually want to happen,” complained protester Mirielle Valdez. “The police are not going to look at that as what we want. They’re going to just look at it as us trying to be gangbangers and trying to steal when in reality we are trying to send a message, but we’re just not doing it in the proper way.”

RELATED: Dozens of people arrested as National Guard moves in to bring control to Twin Cities

Fowler Avenue has since reopened after being closed for most of the night. 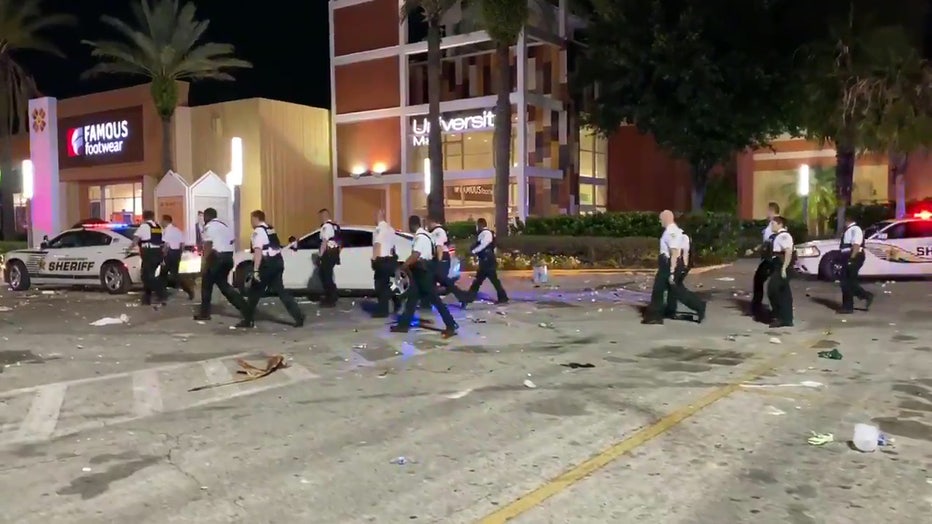 Across the bay, protests were passionate but peaceful. After gathering on the steps of St. Pete City Hall, crowds took to the streets, marching toward the police station while chanting "I can't breathe" -- a few of George Floyd’s final words before he died in police custody.