Many professional sports are having to balance the game with safety amid the COVID-19 pandemic.

LONDON - Nearly 2,000 Scottish residents who attended the ongoing Euro 2020 soccer championship at stadiums across the United Kingdom were infected with COVID-19 and were capable of transmitting it to others, according to a recent report by Public Health Scotland.

Thousands of Scots traveled to London to watch Scotland play England in the the UEFA European Football Championship group stage on June 18.

The report published on Wednesday explained that hundreds entered Wembley Stadium to watch the match in person while thousands gathered in the surrounding area to partake in the festivities. Hundreds also reportedly attended a game hosted at Glasgow’s Hampden Stadium.

Out of the 1,991 people who were identified as being infectious with COVID-19 through contact tracing, 1,294 had traveled to London and 397 had actually entered Wembley, according to the report.

The BBC reported that while only 2,600 tickets for the match at Wembley were allocated due to COVID-19 restrictions, tens of thousands of fans are believed to have traveled to London despite not having a ticket for the event.

The country's national clinical director, Jason Leitch, told the BBC that 2,000 of the 32,000 cases recorded in Scotland since July 11 had been linked to Euro 2020 events.

Euro 2020, which was postponed last March, is the biggest sporting event to return since the onset of the pandemic.

The opening match of soccer’s European Championship was played in the capital of Italy earlier last month, the first country outside Asia to get struck by the pandemic and the first in the world to implement a nationwide lockdown.

The tournament represented a major step forward on the path toward recovery after one of the darkest chapters in the continent’s history since World War II. More than 1 million Europeans have died in the pandemic, including more than 127,000 Italians.

Many worry that it’s still not safe to bring tens of thousands of fans together in stadiums across Europe, but organizers hope measures including crowd limitations, staggered arrival times for fans, social distancing rules and lots of hand sanitizer will help prevent a resurgence of virus infections, which have dropped sharply in Europe in recent months.

In Rome, fans entering the stadium of the opening match were required to bring documentation showing they have been vaccinated against the virus, tested negative in the 48 hours before the match or already had the disease. 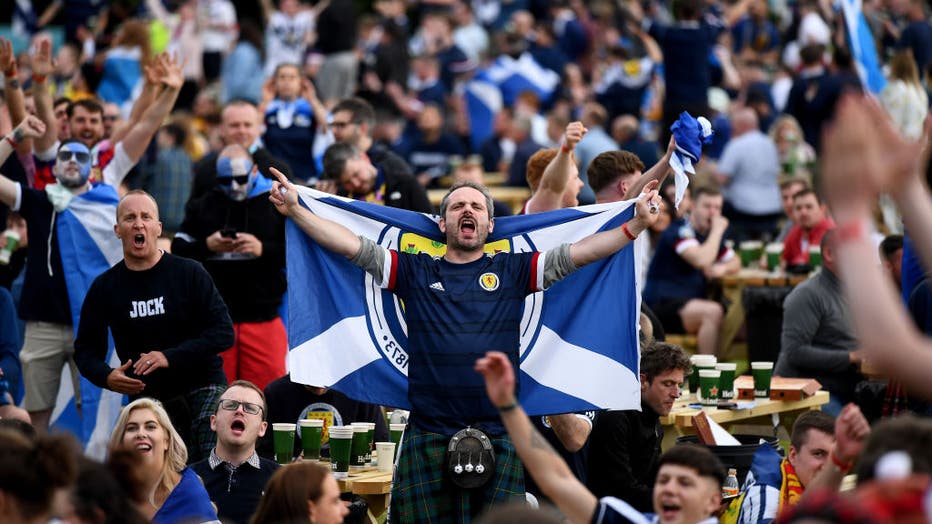 Scotland fans react as they support their team in the Euro 2020 game against England on June 18, 2021 in Glasgow, Scotland.

Besides the outbreak in England, the virus already has had an impact on the tournament, which for the first time is not being hosted by one or two nations but is spread out across the continent with matches in 11 cities.

Spain captain Sergio Busquets tested positive for COVID-19 and missed the team’s first match against Sweden in Seville on June 21. Russia winger Andrey Mostovoy then became the first player to be cut from a national team on June 18 after testing positive for the virus.

Events like Euro 2020 appear to be a testing ground for whether or not the world is ready to return to some sense of normalcy, but the latest alarming coronavirus variant is exploiting low global vaccination rates and a rush to ease pandemic restrictions, adding new urgency to the drive to get more shots in arms and slow its supercharged spread.

The vaccines most used in Western countries still appear to offer strong protection against the highly contagious delta variant, first identified in India and now spreading in more than 90 other countries.

But the World Health Organization warned this week that the trifecta of easier-to-spread strains, insufficiently immunized populations and a drop in mask use and other public health measures before the virus is better contained will "delay the end of the pandemic."

The delta variant is positioned to take full advantage of those weaknesses.

Amid concerns about the variant, parts of Europe have reinstated travel quarantines, several Australian cities are in outbreak-sparked lockdowns — and just as Japan readies for the Olympics, some visiting athletes are infected. The mutation is causing worry even in countries with relatively successful immunization campaigns that nonetheless haven’t reached enough people to snuff out the virus.

And despite the ongoing Euro 2020 match bringing thousands of people together in person, the delta variant has forced Britain, where nearly half the population is fully vaccinated, to postpone for a month its long-anticipated lifting of COVID-19 restrictions, as cases are doubling about every nine days.

Scientists believe the delta variant is about 50% more transmissible than other types. Researchers are just beginning to tease apart why. But there are early clues that some mutations may ease a key step in how the virus slips inside human cells, said Priyamvada Acharya, a structural biologist at the Duke Human Vaccine Institute.

Meanwhile, the one-day international cricket match between England and Pakistan on July 10 has been approved for a full capacity crowd of 31,100 at Lord's stadium in London.

Earlier last month, Wimbledon opened at 50% capacity across the All England Club and will be allowed to have a full crowd of 15,000 at Centre Court for the men’s and women’s finals on July 10-11.

Wembley Stadium is expected to host at least 60,000 fans for the upcoming European Championship semifinals and finals.