NEW YORK - U.S. equity markets clawed back about half of their losses on Monday as the Nasdaq managed to close with gains, helped in part by large tech stocks including Amazon, Apple, Microsoft and Google.

The Nasdaq tacked on nearly 0.5 percent. The Dow Jones Industrial Average dropped 1.4 percent, or 328 points, after falling as many as 624 points while the S&P 500 lost 1 percent.

Earlier in the session, investors digested the historic production cuts agreed to by OPEC and other oil-producing nations.

A consortium of 23 of the world’s largest oil producers reached an agreement on Sunday to cut global production by 9.7 million barrels per day, or nearly 10 percent, in May and June, ending a price war between heavyweights Saudi Arabia and Russia. Output will also be reduced by 8 million bpd from July to December 2020, and by 6 million bpd from January 2021 to April 2022.

West Texas Intermediate crude oil, the U.S. benchmark, was trading higher by 2.02 percent at $23.22 per barrel, giving a lift to companies with exposure to the U.S. shale patch.

Elsewhere, the big banks are in focus as JPMorgan Chase & Co. and Wells Fargo get set to kick off earnings season on Tuesday. Reuters reported JPMorgan is raising its standards for new home mortgages with borrowers now needing to put 20 percent down and have a credit rating of at least 700.

Ford warned revenue from the January through March period will fall 16 percent from a year ago to about $34 billion, and earnings before interest, revenue, taxes and depriciation will be approximately -$600 million.

A preliminary trial found Gilead Science’s remdesivir drug may lower the risk of death in patients who fall ill from COVID-19, according to a report in The New England Journal of Mb$edicine. 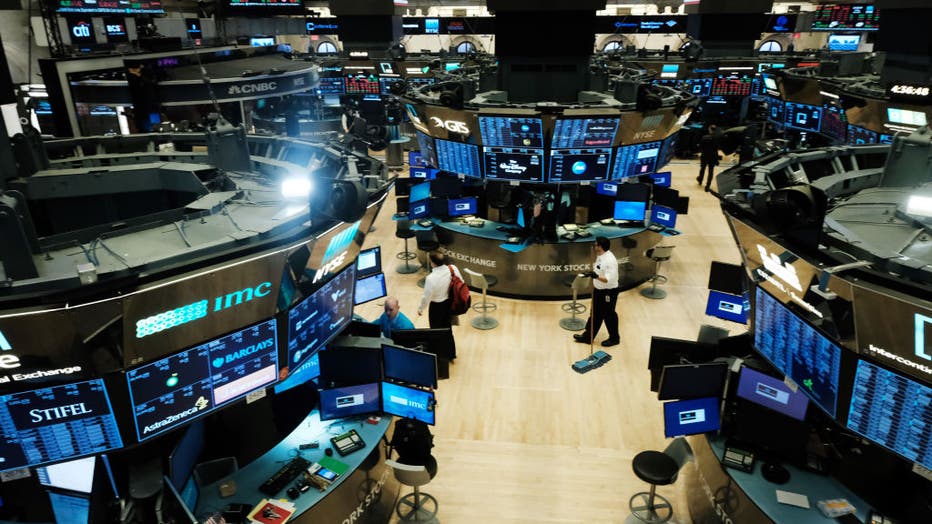 Trading ends for the day on the floor of the New York Stock Exchange (NYSE) on March 20, 2020 in New York City. (Photo by Spencer Platt/Getty Images)

Walt Disney Co. said in a statement out Sunday that it would furlough 43,000 workers at its Walt Disney World Resort due to the COVID-19 pandemic.

Meanwhile, embattled retailer Macy’s has hired Lazard to look into ways the company can bolster its balance sheet.

Markets across Europe were closed in observance of Easter Monday.