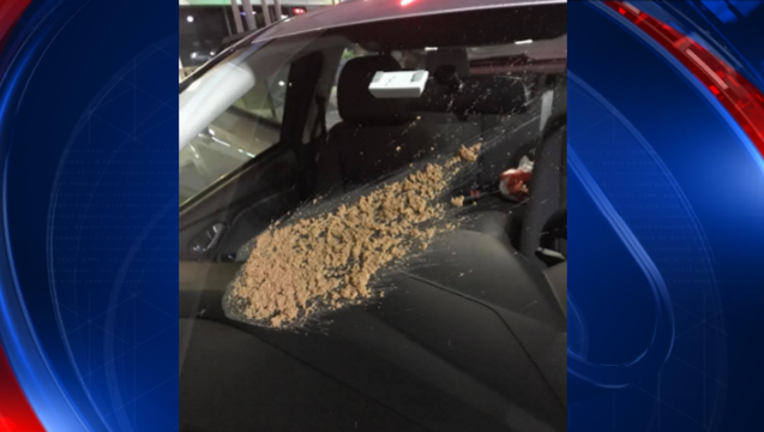 LAUREL, Md. - A Maryland woman says she was driving overnight when another car sped up, got in front her and slowed down, then suddenly “dog poop” splattered across her windshield. The incident, she says, could leave people vulnerable for carjackings and other crimes.

Danaj Edmond told FOX 5 Atlanta it happened as she was driving along Cherry Lane in Laurel around 12:17 a.m. on Friday.

“When I look back on it I remember seeing a black car not too far in front of me that slowed down and I saw two guys walking on the sidewalk,” she recalled in a Facebook post. “It happened so fast that I could not see where it came from.”

Edmond added, "It was just like… a loud splat on the windshield…loud and heavy. I thought my windshield almost cracked—that’s how fast and heavy it happened."

Edmond said she continued to drive and eventually stopped at a nearby Hooters restaurant, where she saw a group of people outside.

“I remember reading a story on Facebook that if something like this happens to you do not put your windshield wipers on because that stuff will smudge all across your windshield blocking your view. And making you an easy target for carjacking,” her post read.

After investigating, Edmond said it was “dog poop” on her windshield. A passenger in the car helped her clean it off as best they could.

Edmond said she wanted to share her story to prevent others from falling for a similar set-up.

“I want to share this so that if this happens to you don't panic and don't turn your windshield wipers on. Keep driving to the nearest safe place and get that stuff off of your windshield immediately. Be Alert and please don't panic,” she wrote.