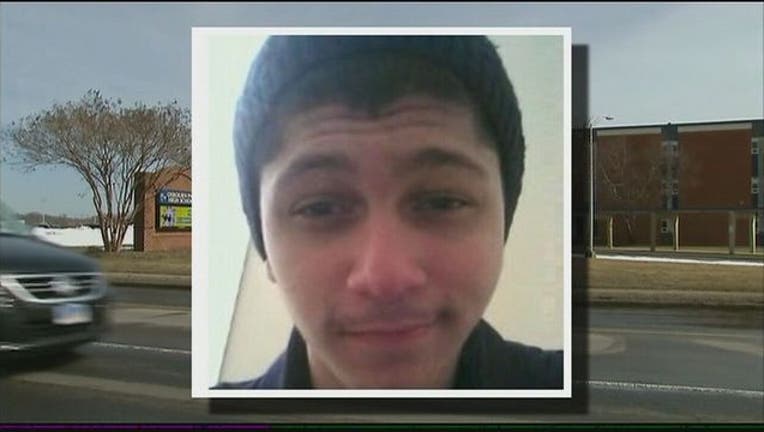 ALEXANDRIA, Va. (AP) — A northern Virginia teenager was sentenced Friday to more than 11 years in prison for helping another teen travel to Syria to join Islamic State militants and for providing other aid to the group.

U.S. District Judge Claude M. Hilton said during sentencing in federal court in Alexandria that he considered 17-year-old Ali Shukri Amin's age and lack of a criminal record in deciding the sentence.

With his parents, stepfather, grandmother and other family watching, Amin told the judge that he was taking responsibility for his actions and wouldn't "ask for or expect sympathy."

"I have not attempted to deny or explain away anything I have done," said Amin, who wore a blue jail jumpsuit with the pants bottoms rolled for his 5 foot 10 inch, 105 pound frame.

Amin, who has cooperated with law enforcement, said in a letter to the judge ahead of the hearing that he denounces the Islamic State group for "its violence and the way it twists the core tenants of Islam." He also talked in court about his Muslim faith, saying his "spiritual journey has only just begun." He said in court and in his letter that in his early teens, when he was seeking to deepen his faith and make sense of what he was reading about in Iraq, Afghanistan and Syria, he turned to the "adults in my life," including imams, but they "could not provide adequate answers" or seemed too "busy to try." He said he got answers through contact with others on the Internet who urged him to "advocate violent jihad."

Though juveniles rarely face charges in the federal system, Amin pleaded guilty in June to conspiring to provide material support to terrorists. As part of his plea, Amin acknowledged using Twitter to provide advice and encouragement to the Islamic State group and its supporters. Through his Twitter handle Amreekiwitness — Amreeki translates to "American" — Amin provided instruction on how to use Bitcoin, a virtual currency, to mask funds going to the group and helped supporters seeking to travel to Syria to fight with the group, court documents said.

Amin also admitted that he helped a classmate, 18-year-old Reza Niknejad, travel to Syria to join the group in January. After taking Niknejad to the airport, Amin delivered a letter and thumb drive to Niknejad's family informing them that they would likely never see him again.

Amin's attorney Joseph Flood had argued that a sentence of about six years was appropriate because of Amin's age. Flood said Amin had been manipulated by older radicals and argued that Niknejad would likely have traveled to Syria even without any assistance from his client. Flood said that Amin's Twitter account may have had several thousand followers but that: "His influence was actually very small." Flood said other than Niknejad, prosecutors can't identify anyone influenced by Amin to travel to join the Islamic State group.

After the hearing, Flood said he was heartened that the judge had imposed a sentence that was less than the 15 years recommended by prosecutors and federal guidelines. But he said he was disappointed the sentence wasn't less.

In arguing for the 15-year sentence, Assistant U.S. Attorney Michael Ben'Ary said in court Friday that Amin "wasn't being radicalized." Instead, "he was radicalizing" others. Ben'Ary said Amin knew what he was doing was illegal.

"Today's sentencing demonstrates that those who use social media as a tool to provide support and resources to ISIL will be identified and prosecuted with no less vigilance than those who travel to take up arms with ISIL," U.S. Attorney Dana Boente said in a statement, using an acronym for the Islamic State group. "The Department of Justice will continue to pursue those that travel to fight against the United States and our allies, as well as those individuals that recruit others on behalf of ISIL in the homeland."