During a Nevada press briefing about vote count in Clark County, an unidentified man interrupted the conference claiming Joe Biden is trying to 'steal' the election.

“The Biden crime family is stealing this election! The media is covering it up!” yelled the man, who ran up behind Clark County Registrar Joe Gloria while the press briefing was underway.

After finishing his rant, the man abruptly left, and Gloria calmly continued the press conference. 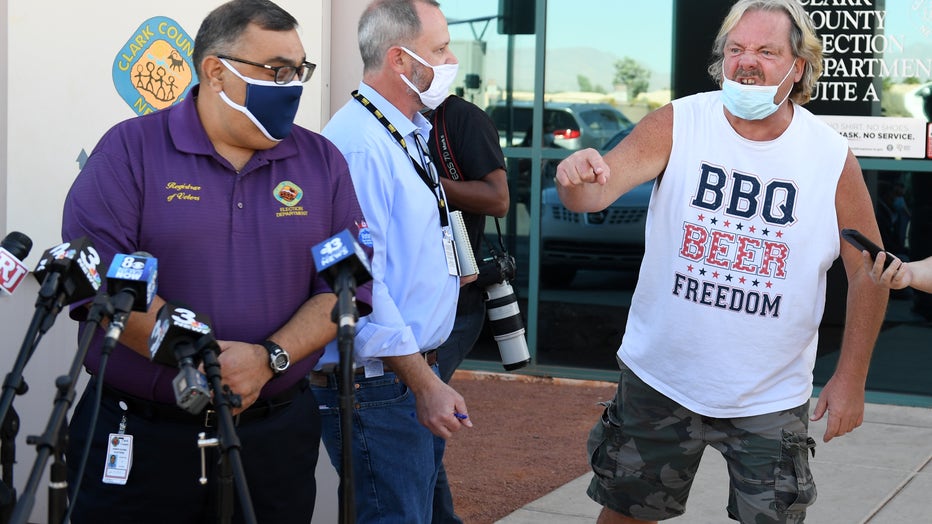 The incident quickly went viral, with many on social media poking fun at the man’s shirt. Trump has repeatedly called

“Can’t we all just come together over some ‘BBQ, beer, and freedom,’” wrote another.

Researchers at the Election Integrity Partnership, a group of some of the world’s top misinformation researchers, found that mentions of voter fraud rose dramatically immediately following President Donald Trump’s early morning remarks falsely claiming victory in the election and alleging fraud, without evidence.

The unfounded allegations exploited public confusion over how elections are managed at a time when many voters were looking for help interpreting the unfolding results, said Kate Starbird, a University of Washington professor and online misinformation expert who is part of the group.

Nevada’s six electoral votes are still up for grabs and are all that Joe Biden needs to declare victory in the 2020 presidential race. Clark County currently favors Biden with a 52.9% lead, according to FOX News as of Nov. 4 at 7 p.m. ET. Full Nevada results are not expected until Thursday morning.

Election officials continued to count votes across the country, the normal process on the day following voting. Unlike in previous years, states were contending with an avalanche of mail ballots driven by fears of voting in person during a pandemic. At least 103 million people voted early, either by mail or in-person, representing 74% of the total votes cast in the 2016 presidential election.

Every election, results reported on election night are unofficial and the counting of ballots extends past Election Day. Mail ballots normally take more time to verify and count. This year, because of the large numbers of mail ballots and a close race, results were expected to take longer.