Graham held a news conference proposing an abortion bill that would prohibit the procedure after 15 weeks of pregnancy with rare exceptions.

A Louisiana woman carrying an unviable fetus was forced to travel thousands of miles to New York to receive an abortion because the procedure is deemed illegal in her home state.

Nancy Davis, 36, told The Guardian that she had her pregnancy terminated on September 1. Davis had learned 10 weeks into her pregnancy that the fetus she was carrying had acrania, a rare and fatal condition in which the baby’s skull fails to form in the womb.

Davis was told that if she brought the pregnancy to full term and gave birth, the baby would likely survive for a very short amount of time — anywhere from several minutes to a week. The physicians located in Davis’ hometown of Baton Rouge, Louisiana, advised her to get an abortion, but said they could not perform the procedure.

"Basically, they said I had to carry my baby to bury my baby," Davis said back in August. "They seemed confused about the law and afraid of what would happen to them." 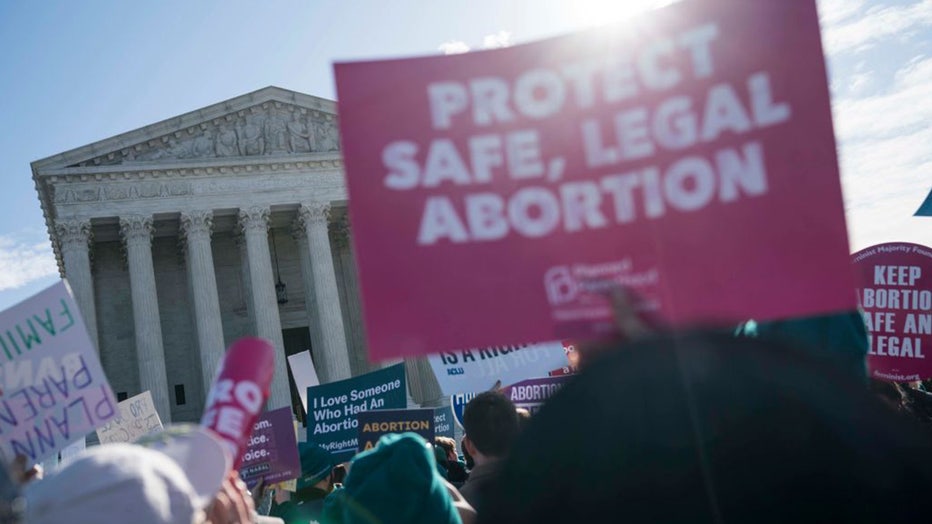 FILE - People participate in an abortion rights rally outside of the Supreme Court. (Sarah Silbiger/Getty Images)

If a doctor performs an illegal abortion in Louisiana, they could face up to 15 years in prison.

State legislation bans all abortions except if there is substantial risk of death or impairment to the patient if they continue with the pregnancy and in the case of "medically futile" pregnancies — when the fetus has a fatal abnormality. There are no exceptions for rape or incest.

However, during the time Davis was seeking to get an abortion, Louisiana trigger laws were heavily criticized by both Davis and abortion-rights advocates for being vague and confusing.

Their concerns were echoed in numerous other states that, like Louisiana, passed so-called trigger laws when the U.S. Supreme Court overturned Roe v. Wade, the landmark 1973 decision guaranteeing a constitutional right to abortion.

"Ms. Davis was among the first women to be caught in the crosshairs of confusion due to Louisiana’s rush to restrict abortion, but she will hardly be the last," Ben Crump, an attorney for Davis, said during a news conference held in August.

Roughly a dozen states currently ban abortions at all stages of pregnancy, with some allowing for narrow exceptions such as in cases of rape, incest or when the pregnant woman’s life is in danger.

In New Orleans, the city council passed a resolution directing police and prosecutors not to use city funds to enforce the ban and to make it "the lowest priority for enforcement."

Louisiana Attorney General Jeff Landry, a Republican who is considered a likely 2023 gubernatorial candidate, described city leaders’ opposition as a "dereliction of duty."

Since Roe v. Wade was overturned in June, battles between Democratic city leaders and Republicans in reliably red states have been happening across the country.

Dozens of prosecutors nationwide — including in Florida — have promised not to pursue charges against those seeking or providing abortions. In St. Louis, hours after the mayor signed a measure providing $1 million for travel to abortion clinics in other states, the Missouri Attorney General sued to block it. Similar to New Orleans, city councils in places such as Austin, Texas, and Nashville have also passed measures urging law enforcement not to prioritize abortion ban enforcement.