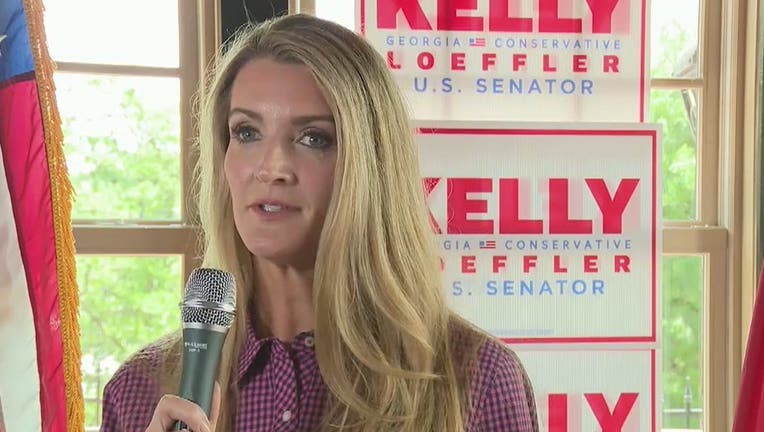 ATLANTA - Former Sen. Kelly Loeffler of Georgia is leaving the door wide open to a potential 2022 run to return to the Senate.

"I have not ruled anything out," Loeffler said in a Fox News interview this weekend.

Loeffler, who was appointed to the Senate by Republican Gov. Brian Kemp after then-GOP Sen. Johnny Isakson resigned in 2019 due to health reasons, narrowly lost to Democrat Raphael Warnock in a January Senate runoff election in the race to fill the final two years of Isakson’s term. Warnock’s razor-thin victory, accompanied by Democrat Jon Ossoff’s narrow victory that same day over Republican Sen. David Perdue in a separate runoff election, tipped the Senate majority to the Democrats.

But Loeffler emphasized that her "focus right now is on building Greater Georgia." That’s the voter registration and outreach group in the Peach State that she launched in February.

"Greater Georgia is about expanding and diversifying our movement, strengthening election integrity, and making sure that we demonstrate that Georgia is a red state in 2022 and beyond," she spotlighted. "There’s a tremendous amount of work that we’ve done. There’s a lot more work to do. We’ve registered thousands of conservatives already. We’ve been working every day on election integrity."

Georgia was long a reliably red state. But President Biden narrowly edged then-President Trump in Georgia in November, becoming the first Democrat to win the state in a presidential election in more than a quarter century. And two months later, the Democrats swept the twin Senate runoff contests.

The Senate is currently split 50-50 between the two major parties, but the Democrats hold a majority due to Vice President Kamala Harris tie-breaking vote through her constitutional duty as president of the Senate. That means the Republicans only need a net gain of one seat in the 2022 midterm elections to regain the majority they lost in January.

While the GOP’s defending 20 of the 34 seats up for grabs next year – including five open seats – national Republicans see Warnock as one of the most vulnerable Democrats on the 2022 ballot.

Loeffler didn’t meet with Sen. Rick Scott of Florida, the chair of the National Republican Senatorial Committee, when she was in Washington, but sources told Fox News that she and the Senate GOP reelection arm chair have spoken multiple times.

Asked if she’s talked to Trump – who remains extremely popular with Republican voters as he continues to play a kingmaker’s role in GOP primaries and flirts with a 2024 White House run – Loeffler told Fox News that they "stay in regular contact."

While Loeffler continues to mull a Senate bid, two other high-profile Republicans – Perdue and former Rep. Doug Collins (who came in third to Warnock and Loeffler in November’s special election) – have passed on launching 2022 Senate campaigns.

Many in the GOP are waiting for signals from Herschel Walker. The former star professional football player and college gridiron legend in the Peach State – he won a Heisman Trophy and helped steer the University of Georgia to a college football national championship – has been encouraged by Trump to run for the Senate. The former president has said he would endorse Walker if he runs.

Walker said in a Fox News interview in April that he was considering a bid, but has made no outward signs of launching a campaign.

Walker was seen sitting next to the former president on Monday at a birthday celebration for Trump at his New Jersey golf resort, in a video posted on Instagram by Donald Trump Jr. and spotlighted by the Atlanta Journal-Constitution.

"We’re all waiting to see if Herschel is going to run or not run. I’d be lying to say we weren’t getting antsy," Georgia based GOP consultant Chip Lake told Fox News "It’s time that Herschel lets us know he’s running or lets us know he’s not running. Because as every day goes by, Raphael Warnock is raising more and more money and we know what this field looks like and I do think this field is in some respects not going develop fully until Herschel Walker makes a public statement on what his intentions are in 2022."

And some Georgia Republicans are concerned about a possible political train wreck if Walker declares his candidacy.

"We don’t know what a Herschel Walker candidacy looks like. What type of a candidate is he going to be. How is going to handle being thrown into the fire. Is he going to be quick on his feet," noted a Republican strategist in Georgia who asked to remain anonymous to speak more freely.

Pointing to Walker’s well-publicized battle with mental illness, the strategist said "he either gets into race and he deals with those issues well and grows, or he gets into the race and he struggles with explaining some of the issues that were in his book and he decides this isn’t for him. That’s why Republicans in Georgia want Herschel Walker to make up his mind a month or two ago."

Four-term Rep. Buddy Carter is one of the Republican politicians waiting on Walker. Carter has said he’ll launch a Senate campaign if Walker decides not to run.

Three Georgia Republicans have already jumped into the race. The most prominent is state Agriculture Commissioner Gary Black, who declared his candidacy earlier this month. And two military veterans who are not well-known, Kelvin King and Latham Saddler, launched Republican Senate campaigns earlier this year.