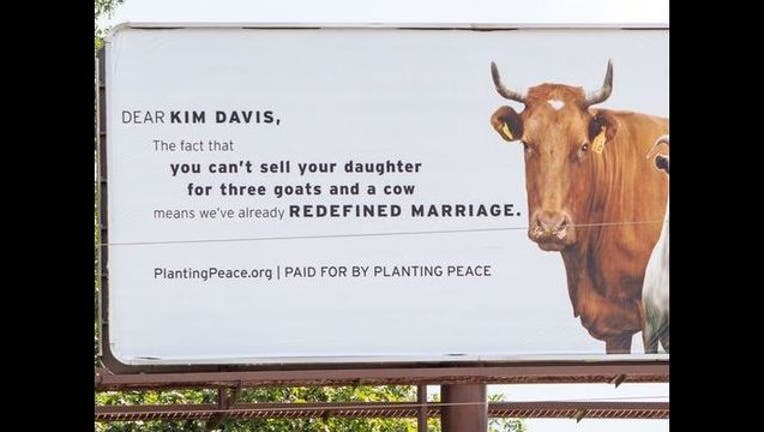 FOX 11 - There's a new billboard in the hometown of Kentucky clerk Kim Davis, who was jailed for refusing to issue same-sex marriage licenses in Rowan County.

Davis, who was jailed Sept. 3 after a judge found her in contempt of court, objected to issuing the licenses on religious grounds.

Shortly after her release from jail last week, the non-profit Planting Peace erected a billboard in Davis’ hometown of Morehead, Kentucky. It reads: "Dear Kim Davis, The fact that you can’t sell your daughter for three goats and a cow means we’ve already redefined marriage."

The group told Buzzfeed and other news outlets the purpose of the billboard is to expose how the anti-LGBT movement is selective in what rules to follow and how they choose to define "traditional" institutions or values.

Planting Peace also posted this message on their website:

As has been painstakingly observed time and time again, the anti-LGBTQ movement is comprised of a substantial number of zealots who unfailingly refer to their rigid interpretation of religious text to narrowly define “traditional” institutions and values. They pick and choose what they wish to convey as immoral and unacceptable, while seemingly sweeping lines of scripture just a few letters away completely under the rug.

In response, Planting Peace has constructed a message for Kim Davis and the anti-LGBTQ movement. The intent of the billboard is to expose this narrow interpretation by Davis and others that they use to defend their discrimination against the LGBTQ community. It is important and relevant to call this out, because these messages and actions are not simply about a political or religious debate. There are LGBTQ youth across the world who are taking their lives at an alarming rate because of these messages from society that make them feel broken or less than. We have to meet hate with love…intolerance with compassion.

Our message to our LGBTQ youth is simple:
You are loved, valued, supported, and beautiful.
There is nothing wrong with you, and we will stand by you.
You are not alone.

Planting Peace also made news in 2013 when it purchased a house directly across from the Westboro Baptist Church and painted is rainbow to show support for LGBT rights.