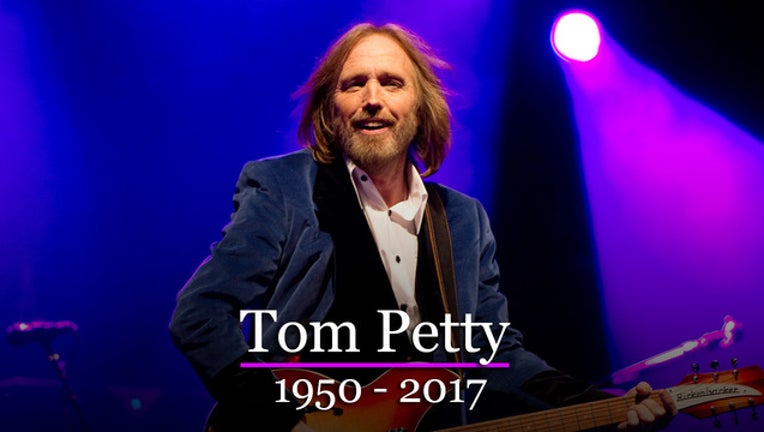 NEWPORT, UNITED KINGDOM - JUNE 22: Tom Petty of Tom Petty and the Heartbreakers performs on the main stage on day 2 of The Isle of Wight Festival at Seaclose Park on June 22, 2012 in Newport, Isle of Wight. (Photo by Samir Hussein/Getty Images)

Tom Petty, an old-fashioned rock superstar and everyman who drew upon the Byrds, the Beatles and other bands he worshipped as a boy and produced new classics such as "Free Fallin,' "Refugee" and "American Girl," has died. He was 66.

Petty passed away Monday night at UCLA Medical Center in Los Angeles a day after he suffered cardiac arrest at his home in Malibu, California, spokeswoman Carla Sacks said.

Petty and his longtime band the Heartbreakers had recently completed a 40th anniversary tour, one he hinted would be their last.

"I'm thinking it may be the last trip around the country," Petty told Rolling Stone last year. "We're all on the backside of our 60s. I have a granddaughter now I'd like to see as much as I can. I don't want to spend my life on the road. This tour will take me away for four months. With a little kid, that's a lot of time."

Usually backed by the Heartbreakers, Petty broke through in the 1970s and went on to sell more than 80 million records. The Gainesville, Florida, native with the shaggy blond hair and gaunt features was loved for his melodic hard rock, nasally vocals and down-to-earth style. The Rock and Roll Hall of Fame, which inducted Petty and the Heartbreakers in 2002, praised them as "durable, resourceful, hard-working, likeable and unpretentious."

"I'm shocked and saddened by the news of Tom's passing, he's such a huge part of our musical history, there'll never be another like him." Eric Clapton wrote in a statement.

Petty's albums included "Damn the Torpedoes," ''Hard Promises" and "Full Moon Fever," although his first No. 1 did not come until 2014 and "Hypnotic Eye." As a songwriter, he focused often on daily struggles and the will to overcome them, most memorably on "Refugee," ''Even the Losers" and "I Won't Back Down."

"It's sort of the classic theme of a lot of the work I've done," he told The Associated Press in 1989. "I think faith is very important just to get through life. I think it's really important that you believe in yourself, first of all. It's a very hard to thing to come by. But when you get it, it's invaluable."

Petty didn't just sing about not backing down, he lived it. In 1979, he was enraged when his record label was sold and his contract transferred. Stating that he would not be "bought and sold like a piece of meat," he self-financed what became "Damn the Torpedoes" and declared bankruptcy rather than allowing his label, MCA, to release it. He eventually reached a new deal with MCA, for better terms. In the early 1980s, he was again at war with MCA, this time over the label's plans to charge extra money, a dollar higher than the standard $8.98, for his album "Hard Promises." He again prevailed.

Petty was both a musician and obsessive fan, one who met his childhood heroes and lived out the fantasies of countless young rock lovers. He befriended Byrds leader Roger McGuinn and became close to George Harrison, who performed on "I Won't Back Down" and joined Petty, Bob Dylan, Roy Orbison and Jeff Lynne in the impromptu super group the Traveling Wilburys. Petty inducted Harrison into the Rock Hall in 2004; two years earlier Dylan's son Jakob inducted Petty. In the 1980s, Petty and the Heartbreakers supported Bob Dylan on a nationwide tour.

He would speak of being consumed by rock music since childhood, to the point where his father, whom Petty would later say beat him savagely, thought he was "mental." Awed by the chiming guitars of the Byrds, the melodic genius of the Beatles and the snarling lyrics of Dylan, he was amazed to find that other kids were feeling the same way.

By his early 20s, Petty had formed the group Mudcrutch with fellow Gainesville natives and future Heartbreakers (guitarist) Mike Campbell and (keyboardist) Benmont Tench. They soon broke up, but reunited in Los Angeles as the Heartbreakers, joined by bassist Ron Blair and drummer Stan Lynch. Their eponymous debut album came out in 1976 and they soon built a wide following, fitting easily into the New Wave sounds of the time.

The world changed more than Petty did over the past few decades. In 2014, around the time he received an ASCAP Founders Award, he told The Associated Press that he thought of himself as "kind of a music historian."

"I'm always interested in the older music, and I'm still always discovering things that I didn't know about," he said. "To be honest, I really probably spend more time listening to the old stuff than I do the new stuff."