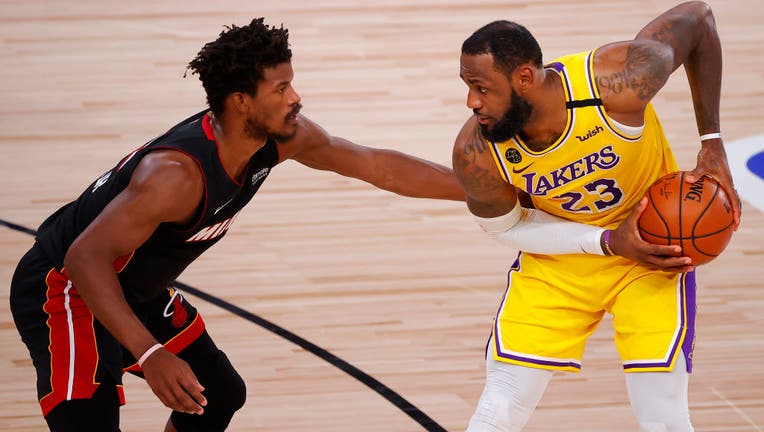 LAKE BUENA VISTA, FLORIDA - OCTOBER 06: Jimmy Butler #22 of the Miami Heat defends LeBron James #23 of the Los Angeles Lakers during the fourth quarter in Game Four of the 2020 NBA Finals at AdventHealth Arena at the ESPN Wide World Of Sports Complex

LAKE BUENA VISTA, Fla. - In a nail-biter, the Los Angeles Lakers beat Miami 102-96 in Game 4 of the NBA Finals. The Lakers are now one game away from becoming champions of the 2019-20 NBA season.

The Los Angeles Lakers beat Miami 102-96 in Game 4 of the NBA Finals. The Lakers are now one game away from becoming champions of the 2019-20 NBA season.

Miami’s Tyler Herro, the youngest player to start in the NBA Finals had an impressive fourth quarter.

However, Herro and explosive NBA star Jimmy Butler were not enough to match LA's momentum.

The Lakers took a 9-point lead with 39.5 seconds left on the clock after Davis hit a 3-point shot.

The Lakers went into the game leading 2-1 in the series after Miami managed to win Game 3 without starters Bam Adebayo and veteran Goran Dragic, who both suffered injuries in Game 1.

Adebayo who was out with a left shoulder strain returned for Tuesday night’s game. The Heat made that determination more than an hour before game time. Dragic was ruled out around the same time after he tried to test his torn left plantar fascia in a warmup session.

• Adebayo, Dragic leave with injuries during Lakers blowout in Game 1 of NBA Finals

Dragic was Miami’s second-leading scorer in the regular season behind Jimmy Butler, averaging 16.2 points off the bench. Adebayo averaged 15.9 points and 10.2 rebounds in his first All-Star season.

Game 5 is scheduled for Friday.