The Los Angeles County Board of Supervisors will consider approving a settlement for two families who lost their loved ones in the helicopter crash that killed nine people, including Kobe Bryant.

LOS ANGELES - The Los Angeles County Board of Supervisors Tuesday approved a $2.5 million settlement for two families suing over the unauthorized sharing of photos of the Kobe Bryant helicopter crash, in which their loved ones also were killed.

Under the proposed settlement, Matthew Mauser would receive $1.25 million and siblings J.J. Altobelli and Alexis Altobelli would share another $1.25 million. 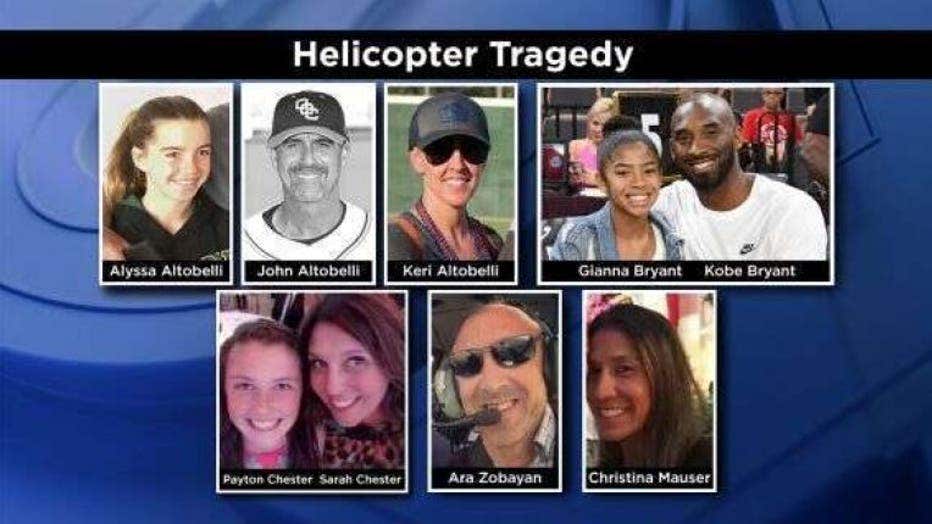 Mauser's wife, Christine, and the Altobellis' mother, father and younger sister -- Keri, John and Alyssa -- died in the Jan. 26, 2020, crash that also killed Bryant, his daughter Gianna and three others.

A report from the County Council recommended the settlement to "avoid further litigation costs," according to The Times.

The county has already spent approximately $1,292,592 in fees and legal costs in the two cases, The Times reported.

"We believe these proposed settlements of $1.25 million are reasonable and fair to all concerned," attorney Skip Miller, of Miller Barondess who represented the county, told the Times.

"We are pleased that the Mauser and Altobelli families, who as private citizens suffered the same grief and loss as others, will be able to move forward after these settlements, which are subject to final approval by the Board of Supervisors. We also hope that eventually the other families will be able to do the same."

New details are emerging about an intense legal battle between Los Angeles County and Vanessa Bryant.

The legal fight between Vanessa Bryant and the county intensified when county lawyers sought to have Bryant undergo a psychiatric examination in advance of the trial scheduled for February 2022. Lawyers argued in court papers that she cannot have severe distress from crash photos she and the public have never seen.

Bryant won a legal victory last when Los Angeles County Sheriff Alex Villanueva and Fire Chief Daryl Osby were ordered to be deposed in the case.

The Times reported that U.S. Magistrate Judge Charles F. Eick said Villanueva and Osby appear to have "unique first-hand, non-repetitive knowledge" relative to the case. The judge limited each deposition to four hours.