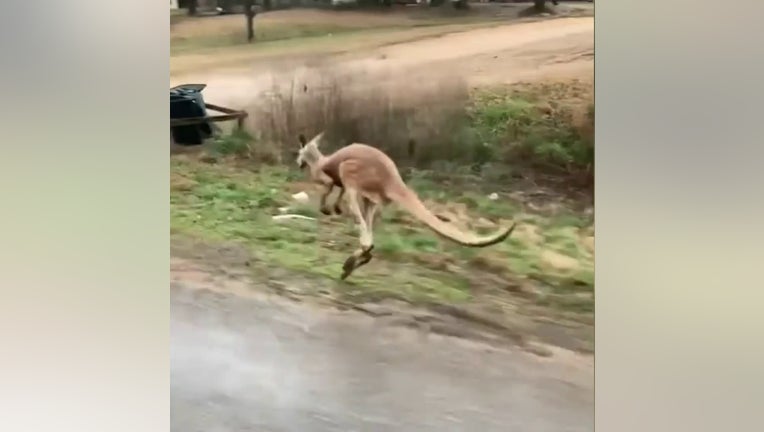 Jack the Kangaroo was seen hopping down an Alabama road on Monday. (Courtesy of Tiffany Perry)

WINFIELD, Ala. - Authorities in Alabama announced Wednesday they apprehended a kangaroo that went viral when it led a chase across the state this week.

Police in Winfield, Ala., posted a photo, claiming the marsupial was in police custody.

Authorities in Alabama launched a search for the young kangaroo, which slipped away from his keepers as he was being hauled through Alabama on his way to a new home.

The 3 ½-year-old kangaroo named Jack (no relation to the 2003 comedy film) escaped in Winfield, Alabama, on Monday afternoon and has been on the hop ever since, Al.com reported.

The animal was being taken from south Mississippi to its new home in Tennessee, said Braxton Basinger of B & H Livestock.

Basinger stopped at his home in Winfield and planned to keep the kangaroo there until he made the final delivery Thursday. A worker let go of the kangaroo while taking it out of the trailer, he said.

Jack was spotted hopping along a road Monday by a woman who unsuccessfully tried to recapture him but she was able to capture video of the animal.

"Just for future reference if you need my help wrangling a kangaroo the moment of truth I will bail," Tiffany Perry wrote. "This joker is running dead at me and I jumped out the way. I’m not squaring up against one. I saw my life flash before my eyes."

Basinger said that he and others planned to search on horseback for the kangaroo.