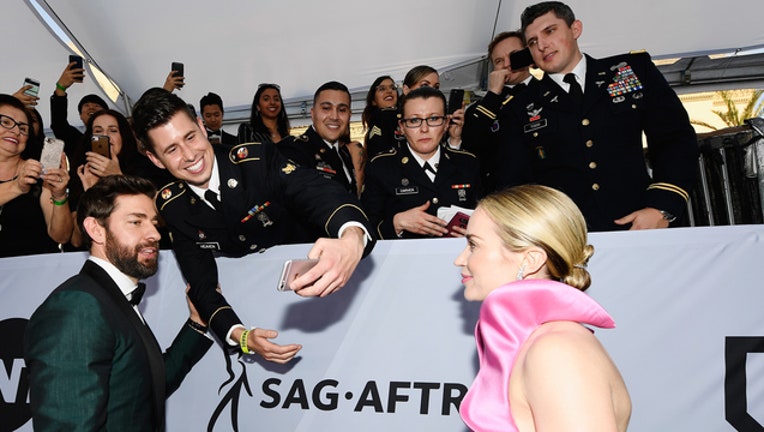 FOX NEWS - Memorial Day is known for barbecues and beers but most importantly, it's also time to thank veterans for their service to the country.

John Krasinski is just one actor out of many who took a little time out of his busy pre-Memorial week to give a special shout out to all the service men and women in the United States and challenge his millions of followers to complete The Murph Challenge.

The Murph Challenge is an extremely hard exercise circuit that honors U.S. Navy SEAL LT. Michael Murphy who designed the workout while on deployment. He was later killed in combat and received the Medal of Honor posthumously for his bravery.

The actor and his trainer, Don Saladino, posted a message on Thursday while wearing Murph Challenge t-shirts. "Memorial Day is coming up. Take a moment of your day Monday to say thank you to the brave men and women who laid down there lives for all of us. Wanna do a little something more? Take the #TheMurphChallenge!!" wrote Krasinski.

The workout consists of a 1-mile run,100 pull-ups, 200 pushups, 300 squats, and another 1-mile run. It's not mentioned but a Murph workout is usually completed wearing a 20-pound vest to simulate how much equipment soldiers carry in war.

Krasinski tagged his two other Murph partners, fellow actors Dwayne "The Rock" Johnson and Chris Pratt, who have previously completed the challenge.

Pratt documented his workout with a video on May 16.

"Thank you to Lt. Michael P Murphy and the millions of soldiers who have paid the ultimate sacrifice for our freedom. We live this life because you laid down yours, gratitude and prayers for all of you," he captioned the post.

"An honor to drop sweat and pain for #TheMurphChallenge. Thank you brother @johnkrasinski for the challenge. And most importantly, thank you to our men and women of our US military - past and present. And boundless gratitude to their families at home who endure it all as well. Great day of sweat, pain and a few miscounts in the #IronParadise," the "Jumanji: Welcome to the Jungle" star wrote.