GAZA CITY, Gaza Strip - The Israeli military unleashed another heavy wave of airstrikes Monday on the Gaza Strip, saying it destroyed militant tunnels and the homes of nine Hamas commanders. International diplomacy to end the weeklong war that has killed hundreds appeared to make little headway.

Israel has said it will press on for now with its attacks against Hamas, the militant group that rules Gaza, and the United States signaled it would not pressure the two sides for a cease-fire even as President Joe Biden said he supported one.

At least 212 Palestinians have been killed in the week of airstrikes, including 61 children and 36 women, with more than 1,400 people wounded, according to the Gaza Health Ministry. Ten people in Israel, including a 5-year-old boy and a soldier, have been killed in the ongoing rocket attacks launched from civilian areas in Gaza toward civilian areas in Israel.

Violence has also erupted between Jews and Arabs inside Israel, leaving scores of people injured. On Monday, a Jewish man attacked last week by a group of Arabs in the central city of Lod died of his wounds, according to police.

Prime Minister Benjamin Netanyahu met with top security officials on Monday evening and later said Israel would "continue to strike terror targets" in Gaza. "We will continue to operate as long as necessary in order to return calm and security to all Israeli citizens," he said.

The new airstrikes, which hit Gaza overnight Monday and again in the evening, hollowed out one floor of a multistory concrete building and killed five people. A woman picked through clothing, rubble and splintered furniture in a room that had been destroyed. One strike demolished the wall of one room, leaving untouched an open cabinet filled with bedding inside. Children walked over debris in the road.

A car in the street that witnesses said was hit by an airstrike was bent and torn, its roof ripped back and what was left of the driver's side door smeared with blood. A beachside cafe the car had just left was splintered and on fire. Rescue workers tried to put out the blaze with a small fire extinguisher.

Gaza City’s mayor, Yahya Sarraj, said the strikes had caused extensive damage to roads and other infrastructure. He said water supplies to hundreds of households were disrupted. "We are trying hard to provide water, but the situation remains difficult," he said.

President Biden remarks on situation in the Middle East

President Biden took reporter questions during a COVID-19 press conference, remarking on the situation in the Middle East.

The U.N. has warned that the territory's sole power station is at risk of running out of fuel. Gaza already experiences daily power outages for between eight and 12 hours, and tap water is undrinkable. Mohammed Thabet, a spokesman for the territory's electricity distribution company, said it has fuel to supply Gaza with electricity for two or three days.

Palestinian officials said Israel pledged to open its only cargo crossing with Gaza for several hours Tuesday to allow humanitarian aid — including fuel, food and medicine — to enter.

Israel also said it targeted what it suspected was a Hamas submersible weapon preparing for an attack on Israel's coast.

The war broke out May 10, when Hamas fired long-range rockets at Jerusalem after weeks of clashes in the holy city between Palestinian protesters and Israeli police. The protests were focused on the heavy-handed policing of a flashpoint sacred site during the Muslim holy month of Ramadan and the threatened eviction of dozens of Palestinian families by Jewish settlers.

More protests were expected across the region Tuesday in response to a call by Palestinian citizens of Israel for a general strike. The protest has the support of Palestinian Authority President Mahmoud Abbas’ Fatah party.

RELATED: US 'working tirelessly' to help stop the violence as calls mount for Gaza-Israel cease-fire

The Biden administration has declined so far to publicly criticize Israel’s part in the fighting or send a top-level envoy to the region. On Monday, the United States again blocked a proposed U.N. Security Council statement calling for an end to "the crisis related to Gaza" and the protection of civilians, especially children.

The White House said Monday evening that Biden expressed "support" for a cease-fire during a call with Israeli Prime Minister Benjamin Netanyahu. But Secretary of State Antony Blinken signaled earlier that the U.S. did not intend to pressure the two sides.

"Ultimately it is up to the parties to make clear that they want to pursue a cease-fire," Blinken told reporters during a trip to Denmark.

German Chancellor Angela Merkel, who spoke Monday with Netanyahu, emphasized her country's solidarity with Israel, condemned the continued rocket attacks from Gaza, and expressed hope for a swift end to the fighting, according to her office.

Hamas’ top leader, Ismail Haniyeh, who is based abroad, said the group has been contacted by the United Nations, Russia, Egypt and Qatar as part of cease-fire efforts but "will not accept a solution that is not up to the sacrifices of the Palestinian people."

Since the fighting began, the Israeli military has launched hundreds of airstrikes it says are targeting Hamas’ militant infrastructure. Palestinian militants in Gaza have fired more than 3,200 rockets into Israel. Israeli military officials said Hamas had stockpiled about 15,000 rockets before the war started. Rocket attacks continued Monday, with one hitting a building in the city of Ashdod that caused injuries, the Israeli police said. 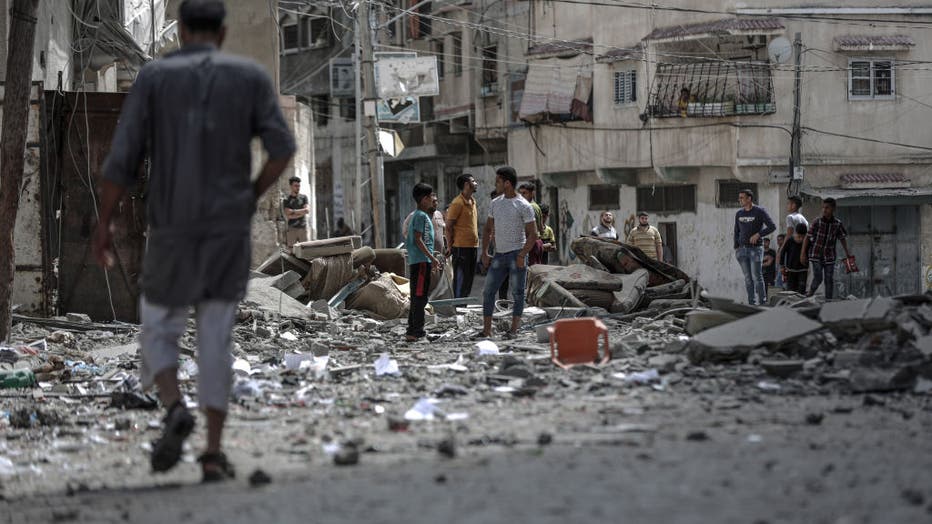 Israel’s airstrikes have leveled a number of Gaza City’s tallest buildings, which Israel alleges contained Hamas military infrastructure. Among them was the building housing The Associated Press Gaza office and those of other media outlets.

Netanyahu alleged that Hamas military intelligence was operating inside the building and said any evidence would be shared through intelligence channels. Blinken said he hasn’t yet seen any evidence supporting Israel’s claim.

AP President Gary Pruitt called for an independent investigation into the attack.

"As we have said, we have no indication of a Hamas presence in the building, nor were we warned of any such possible presence before the airstrike," he said in a statement. "This is something we check as best we can. We do not know what the Israeli evidence shows, and we want to know."

The Israeli military said it struck 35 "terror targets" Monday as well as the tunnels, which it says are part of an elaborate system it refers to as the "Metro," used by fighters to take cover from airstrikes. They included a strike against a building that housed the Qatari Red Crescent, Qatar said. That attack killed a man and a 12-year-old girl.

The tunnels extend for hundreds of kilometers (miles), with some more than 20 meters (yards) deep, according to an Israeli Air Force official who spoke to reporters on condition of anonymity, in keeping with regulations. The official said Israel was not trying to destroy all the tunnels, just chokepoints and major junctions.

Hamas and Islamic Jihad say at least 20 of their fighters have been killed, while Israel says the number is at least 130 and has released the names of and photos of more than two dozen militant commanders it says were "eliminated." The Gaza Health Ministry, which is controlled by Hamas, does not give a breakdown of how many casualties were militants or civilians.

This story has been updated to correct that Hamas leader Ismail Haniyeh said the group has been contacted by the United Nations, not the United States.