U.S. officials said the military airstrikes send the message that the U.S. will not tolerate actions by Iran that jeopardize American lives.

BAGHDAD - An Iranian-backed militia said Monday that the death toll from U.S. military strikes in Iraq and Syria against its fighters has risen to 25, vowing to exact revenge for the "aggression of evil American ravens."

The U.S. attack — the largest yet targeting an Iraqi state-sanctioned militia — and the calls for retaliation, represent a new escalation in the proxy war between the U.S. and Iran playing out in the Middle East that could threaten U.S. interests in the region.

The calls for revenge in Baghdad came a day after U.S. Defense Secretary Mark Esper said Washington had carried out military strikes targeting the Iranian-backed Iraqi militia it had blamed for a rocket attack that killed an American contractor in Iraq last week.

Secretary of State Mike Pompeo said the strikes send the message that the U.S. will not tolerate actions by Iran that jeopardize American lives.

The U.S. military said "precision defensive strikes" were conducted against five sites of Kataeb Hezbollah, or Hezbollah Brigades in Iraq and Syria. The group, which is separate force from the Lebanese militant group Hezbollah, operates under the umbrella of the state-sanctioned militias known collectively as the Popular Mobilization Forces. Many of them are supported by Iran. 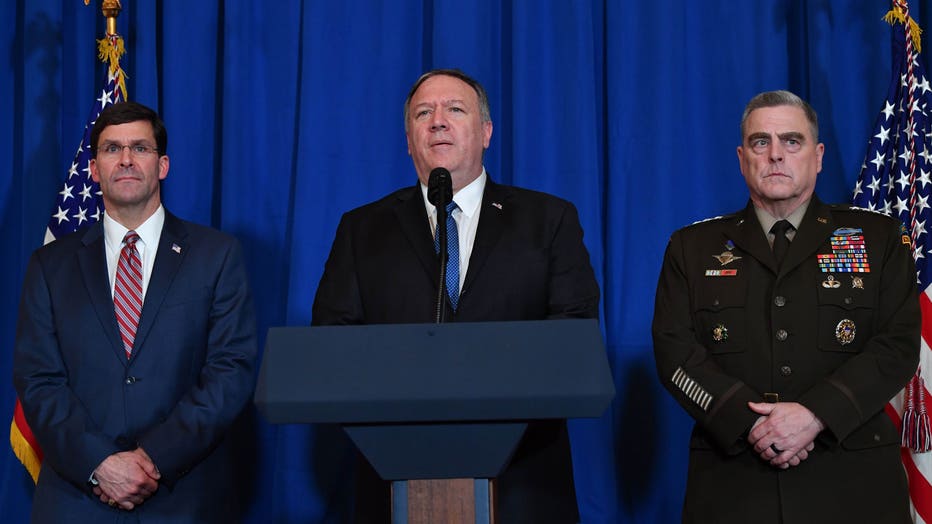 U.S. Secretary of State Mike Pompeo (C), U.S. Secretary of Defense Mark Esper (L) and Chairman of the Joint Chiefs of Staff US army general Mark A. Milley (R) speak on stage during a briefing on the past 72 hours of events in Mar a Lago, Palm Beach,

"Our battle with America and its mercenaries is now open to all possibilities," Kataeb Hezbollah said in a statement around midnight Sunday. "We have no alternative today other than confrontation and there is nothing that will prevent us from responding to this crime.“

The U.S. blames the militia for a rocket barrage Friday that killed a U.S. defense contractor at a military compound near Kirkuk, in northern Iraq, as well as for a series of other attacks on bases that house American troops in Iraq that have not been claimed by any faction. Officials said as many as 30 rockets were fired in the Kirkuk attack.

A spokesman for Kataeb Hezbollah denied that the group was behind the rocket attacks on U.S. bases, including the one that killed the American contractor, saying Washington is using them as a pretext to attack his group.

The spokesman, Mohammed Mohieh, told The Associated Press the death toll from the American airstrikes rose to 25 on Monday and that at least 51 militiamen were wounded, some of whom were in serious condition. The militia would retaliate, he said but added that the group's commanders would decide on the form of retaliation.

“These forces must leave,” he said of U.S. troops in Iraq, calling the latest attack a “crime” and a “massacre.”

The U.S. has maintained some 5,000 troops in Iraq at the invitation of the Iraqi government, to help assist in the fight against the Islamic State group.

An official with the Popular Mobilization Forces said one of the American missiles struck a room where the fighters were taking a nap in the afternoon, killing some of them in their sleep as the ceiling collapsed. The official, who spoke on condition of anonymity because he was not authorized to talk to reporters, said U.S. forces have targeted Kataeb Hezbollah in the past but offered no evidence to support his claims.

Lebanon's Iran-backed Hezbollah also blasted the "brutal American aggression," saying those who took the decision to carry out the attack "will soon discover how stupid this criminal decision was.“

Kataeb Hezbollah is led by Abu Mahdi al-Muhandis, one of Iraq’s most powerful men. He once battled U.S. troops and is now the deputy head of the Popular Mobilization Forces. In 2009, the State Department linked him to the elite Quds Force of Iran’s Revolutionary Guard, designated a foreign terrorist organization by President Donald Trump earlier this year.

The attack that killed the American contractor and U.S. counter-strikes come as months of political turmoil roil Iraq. About 500 people have died in anti-government protests, most of them demonstrators killed by Iraqi security forces.

The mass uprisings prompted the resignation last month of Prime Minister Adel Abdul-Mahdi, who remains in a caretaker capacity.

In a statement, Abdul-Mahdi said Esper had called him about a half-hour before the U.S. strikes on Sunday to tell him of U.S. intentions to hit bases of the militia suspected of being behind Friday's rocket attack. Abdul-Mahdi said he asked Esper to call off the U.S. plan.