DES MOINES, Iowa - Iowa Gov. Kim Reynolds on Friday signed into law a bill that allows Iowa workers to seek medical and religious exemptions from COVID-19 vaccine mandates and guarantees that those who are fired for refusing a vaccine will qualify for unemployment benefits.

Reynolds signed the bill a day after the Iowa Legislature passed it in a one-day special session convened to pass the state's redistricting maps. The law becomes effective immediately.

Reynolds has opposed government requirements for masks and vaccines, even though COVID-19 has killed nearly 7,000 people in Iowa and medical science has shown both tools to be effective in reducing the spread of the coronavirus.

She said in a statement that "no Iowan should be forced to lose their job or livelihood over the COVID-19 vaccine." 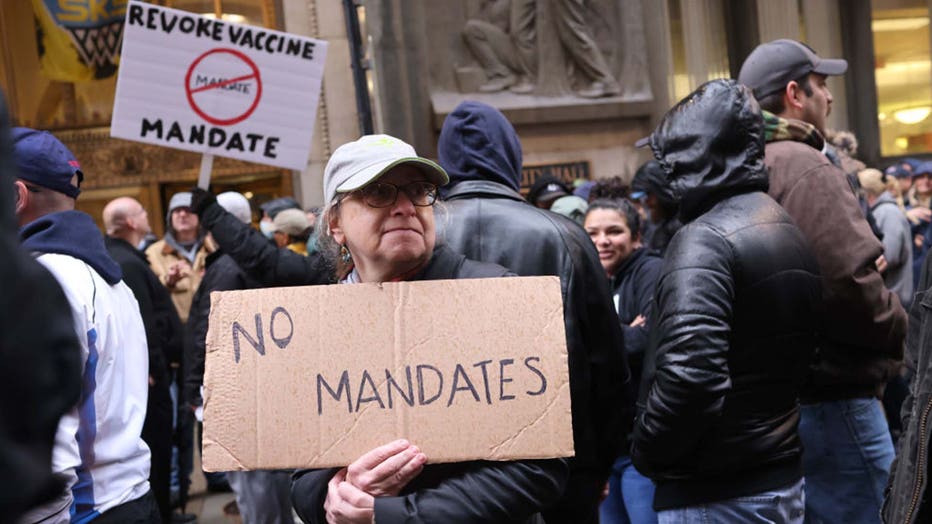 FILE - Police officers along with other city workers and their supporters protest at city hall the mayor's vaccination policy for city employees on Oct. 25, 2021. (Scott Olson/Getty Images)

RELATED: Nearly two-thirds of Americans have at least 1 dose of COVID-19 vaccine

Reynolds said she believes the vaccine is the best defense against COVID-19 but has often voiced opposition to mandates.

Iowa remains 23rd in the nation for percentage of its population fully vaccinated at 55.4%, according to the Centers for Disease Control and Prevention. About a third of the state's population still has not received at least one dose of vaccine and most of the state continues to experience a high level of community spread of the virus.

Reynolds said she plans to sue the federal government to challenge its proposed vaccine mandates once President Joe Biden's administration releases the rules.

Other Republican-led states also have pushed back against efforts to require employee vaccinations including Montana, Arkansas, Texas and West Virginia.