A Kentucky girl was surprised by her school after they included a photo of her service dog in their yearbook.

LOUISVILLE, Kentucky - When Heather Lange and her 7-year-old daughter, Hadley Jo, opened her school’s yearbook, they were met with a welcome surprise.

Next to Hadley Jo’s picture was a picture of a dog — but not just any dog. It was Hadley Jo’s service dog, Ariel.

Hadley Jo suffers from seizures due to epilepsy and Ariel, her Labradoodle service dog, never leaves her side, not even in the yearbook.

St. Patrick Catholic School in Louisville, Kentucky thought it would be a nice surprise for the family to include a significant part of Hadley Jo’s life in her yearbook.

“When we picked up that yearbook and saw the photograph, I thought, ‘Oh my gosh, look at the message this school is presenting to the world,’” Lange said. “Not everyone looks the same or learns the same and here’s a girl who looks different and learns different but that’s OK.”

Hadley Jo suffered her first seizure when she was just 17 months old during a family outing at McAllister’s Deli in Louisville.

Like any mother, Lange was striken by panic. “I panicked,” she said. “You’d never know I was medical that day. All of that just flies out the window when that’s your child.”

Lange has worked as a nurse practitioner for over 15 years, but once her daughter “went limp” and “was twitching” in her arms, “I fell apart in ways that I never thought I could or would,” Lange said.

But not long after, Lange’s motherly and medical instincts kicked in and she started compressions on her daughter and saw the air going in and out of her chest as she drove her daughter to the hospital.

“I’ll never forget that day,” she said. “I was just thinking to myself, ‘God, please don’t take her. I’m supposed to go first.’”

Hadley Jo was diagnosed with cryptogenic localization-related epilepsy, and according to Lange, the family had no history of the condition. 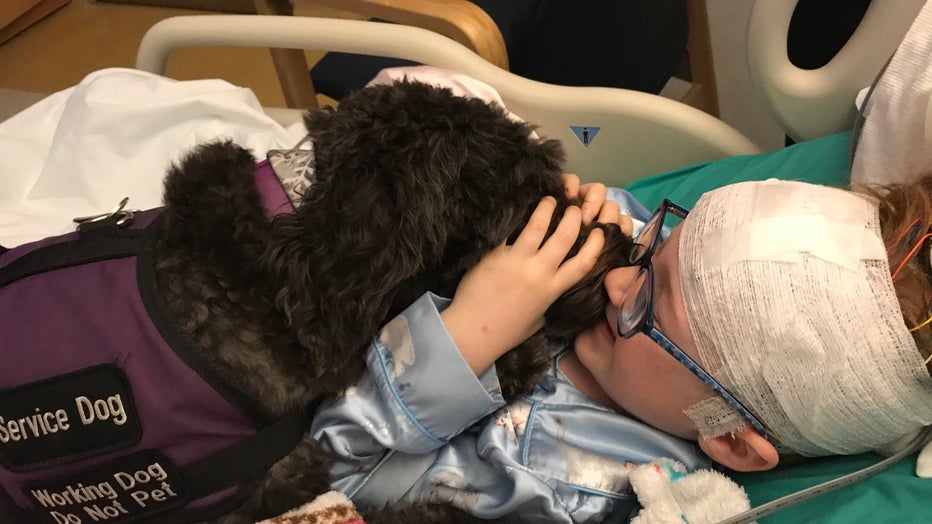 Ariel and Hadley Jo together.

“It just sort of hit us like a brick wall,” Lange said. “She falls into that group of kids where it’s just unknown. Which is even scarier.”

The news came as blow to Lange’s husband, Jason, and her eldest daughter, Hannah, who had witnessed her baby sister go limp in her mother’s arms.

Then one day, while she was visiting her sitter’s home, Lange met her sitter’s son, who was a retired veteran and also suffered from seizures. He had a service dog, which was a German Shepherd.

“I was sitting in the house and then the dog tried pulling Hadley Jo down to the ground and then she had a seizure,” Lange said. “That dog totally knew.”

That’s when Lange had her epiphany: “There is help out there that’s not conventional medicine.” 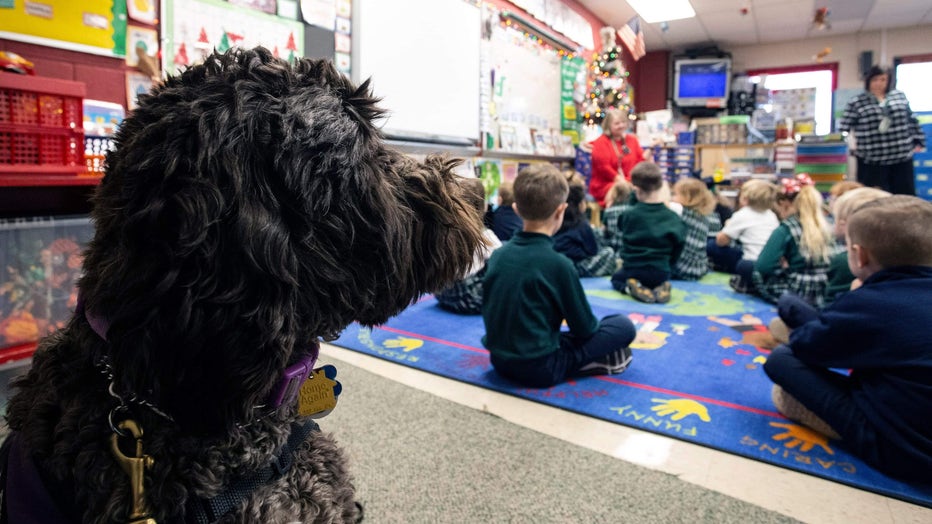 Ariel in class with Hadley Jo.

Lange then went on her search for a service dog that could help keep her daughter safe, but quickly realized that service dogs are expensive.

“Basically, a service dog is around $20,000. And to get it through a non-profit could take between four or six years,” Lange said. “I don’t have six years. I need this now.”

After some research, Lange found the Ultimate Canine in Indianapolis that bred and trained all sorts of dogs, including the one she’d hoped she could get for Hadley Jo.The dogs were expensive and the company required a costly deposit before reserving a dog to match with Hadley Jo, but that’s when Lange’s community stepped up and helped raise the funds to get them the perfect service dog.

“They bent over backwards and are beyond generous and kind and raised the money in less than six months,” Lange said. “I am so blessed and fortunate, I really am.”

Hadley Jo was matched with a Labradoodle named Ariel and in seven months time, Ariel would be in her forever home with her new charge. 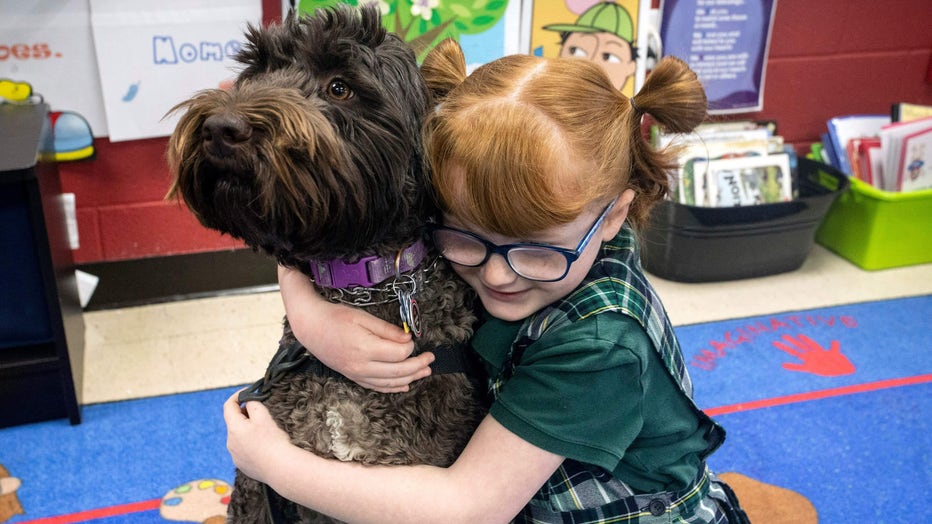 Ariel with Hadley Jo in class.

Ultimate Canine accompanied Ariel to Louisville where they stayed in Lange’s home for a week to ensure Ariel could be trained to be in their home.

“They believe in what they do and they’ve never had problems with their dogs,” Lange said.

And at 3 years old, Hadley Jo had her forever partner to keep her safe.

Ariel accompanies Hadley Jo to school, soccer and has even appeared on stage at her dance recitals from time to time. 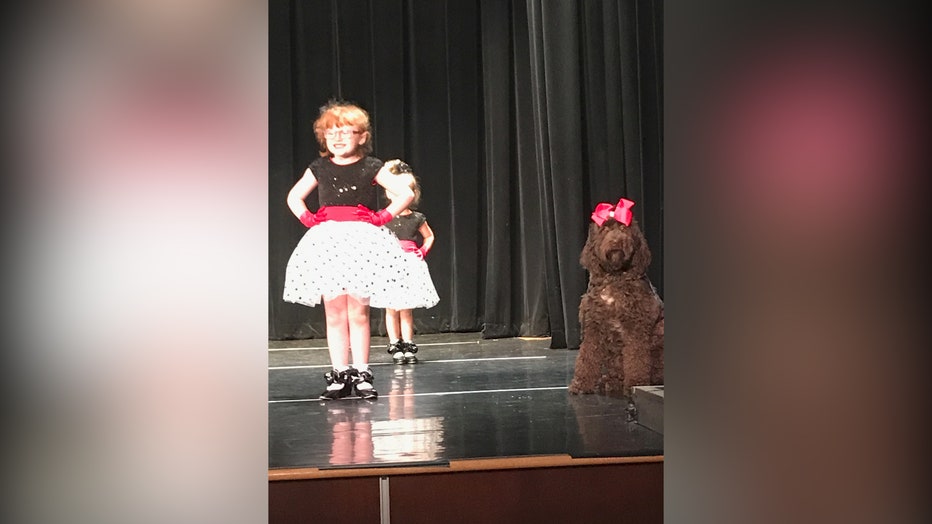 Hadley Jo and Ariel together at a dance recital.

“She wants to be with my daughter, if that makes sense,” Lange said. “We’re so blessed that we’ve seen them bond with our own eyes.”

“I really feel God gave us this for a reason and I just really felt like we need to do something positive and see something good come from something so ugly. That’s always been my goal and I feel like I’m working on that,” Lange said.

Lange, Hadley Jo and Ariel have partnered with the Epilepsy Foundation of Kentuckiana that helps educate families who may be looking to get a service dog for those in their families with similar conditions.

“I just felt like that was important to be a sort of resource for families that have a child with epilepsy,” Lange said. “My life is overall better, my family’s life (which has grown with a new baby sister named Heidi) is better because we have this gift, because this gift is my eyes and ears when I’m not around.”

“It’s very interesting how this all started and how it all evolved,” Lange continued. “It’s fascinating to look at where all this has gone and in a short amount of a few years. How we’ve grown and the awareness we are creating for the community.”

Lange was recently able to help another family from Louisiana.

“We don’t have enough to give to a family yet but I was able to help this mom make a decision and answer her questions,” Lange said. “I’ve walked these shoes and I’ll walk them with you. I never met this woman but I feel like she is a good friend. That’s very therapeutic that I can do this. As nurse practitioner, I can help fix people.” 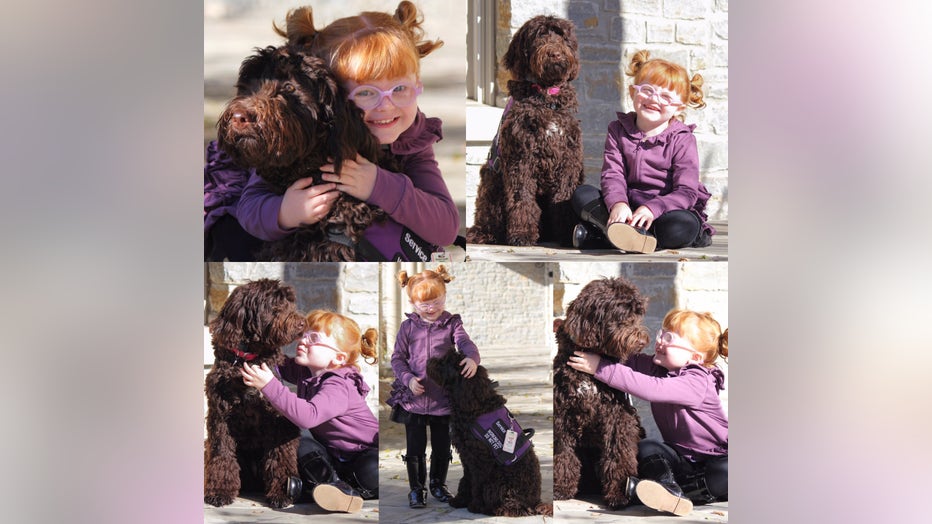 “I wanted Hadley Jo to have a scrapbook of her journey online,” Lange said. The public Facebook page documents Hadley Jo and Ariel’s journey together as they maneuver through her condition.

“Ariel is able to alert us prior to a seizure and when she alerts us, we are able to administer rescue seizure medication and I think that is absolutely incredible,” Lange said. “I don’t know how I can ever thank this dog.”