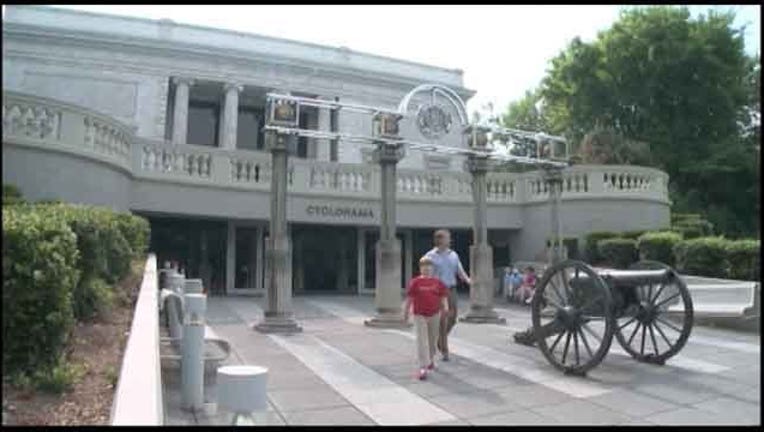 ATLANTA (AP) - A colossal panoramic painting depicting the Battle of Atlanta from the Civil War will be lifted by cranes from the building where it has been for nearly a century and then trucked to its new location.

Moving the 6-ton Cyclorama - one of the world's largest paintings - from Grant Park to the Atlanta History Center across town marks a major milestone in its restoration, historians said.

"We're on the cusp of a historic moment," said Gordon Jones, a military historian and curator at the Atlanta History Center.

Crews began the delicate process Thursday, and the move was expected to take two days. Those in charge say they're using extreme caution to ensure the 15,000-square-foot painting is not damaged.

The painting's vivid scenes of charging soldiers, rearing horses, battle flags and broken bodies stretch the length of a football field when it is fully unfurled and on display.

Before the move, the painting was cut at a seam into two pieces. Both pieces were rolled onto gigantic, custom-built steel spools, each taller than a four-story building.

Holes were carved in the concrete roof of the old Atlanta Cyclorama and Civil War Museum. Cranes will lift these spools of painted history through the roof, and then onto waiting trucks for the trip nine miles north to a brand new building at the Atlanta History Center, spokesman Howard Pousner said.

The artwork, created by the American Panorama Co. in Milwaukee in the 1880s, is one of only two such panoramas on display in the nation. The other one is at Gettysburg National Military Park in Pennsylvania.

The Atlanta painting had long been housed in a corner of the city zoo, something of a historic oddity in a city whose modern persona is more entwined with civil rights than the Civil War.

But before the age of movies, the panoramas offered a 360-degree view of battles and other historic events, and their popularity gave rise to a lucrative business for painters. The American Panorama Co. hired many German immigrants to paint the giant scenes at the Milwaukee company.

Now, a collection of 140-year-old diaries written by one of the main painters - Friedrich Wilhelm Heine - is providing new insights about their visit to Atlanta to make sketches for the Cyclorama, and their return to Milwaukee in a frantic effort to meet a deadline.

"His diaries are essentially the only first-hand accounts of any of the painters who worked in Milwaukee at the time," said Kevin Abing, an archivist at the Milwaukee County Historical Society.

Art historian Michael Kutzer, a painter who speaks German, is working to decipher Heine's German diary entries. The intent is to give historians their first look at the step-by-step process of creating the mammoth panoramic paintings.

In summaries provided to The Associated Press, Heine describes a hurried effort to complete the Atlanta artwork on time, despite his painful battle with "frozen toes."

He recounts how the painters made sketches in Atlanta atop a 25-foot scaffold over railroad tracks, despite one painter being afraid to climb it.

The diary entries also show that the painters didn't always get along. Heine complained about the tardiness of one painter on his crew, and how the Austrians "chatter more than they are working." Once, after a few beers, a painter became drunk and angry at Heine "and entire Amerika."

After a lengthy restoration process, the "Battle of Atlanta" will go on display again next year in a new 23,000-square-foot building at the Atlanta History Center, officials said.

A viewing platform rising 12 feet above the gallery floor will offer "the sense of being enveloped by the 360-degree experience," history center officials said.

The new exhibit will also include the "diorama" featuring 128 plaster figures that will continue to be displayed in the foreground of the painting as they have been since the 1930s, Jones said.

Among those plaster figures is a dead Union soldier with Clark Gable's face. It was created after Gable and other "Gone With The Wind" cast members visited the Cyclorama during the film's 1939 Atlanta premier, Jones said. While visiting, the actor made an offhand comment to Atlanta Mayor William B. Hartsfield about his likeness being included in the display, Jones said.

"So Hartsfield contacted the guys who had done the plaster figures, and they promptly came up with a figure of a dead Union solider lying in the grass with the face of Clark Gable and a big bullet hole in his chest," Jones said.