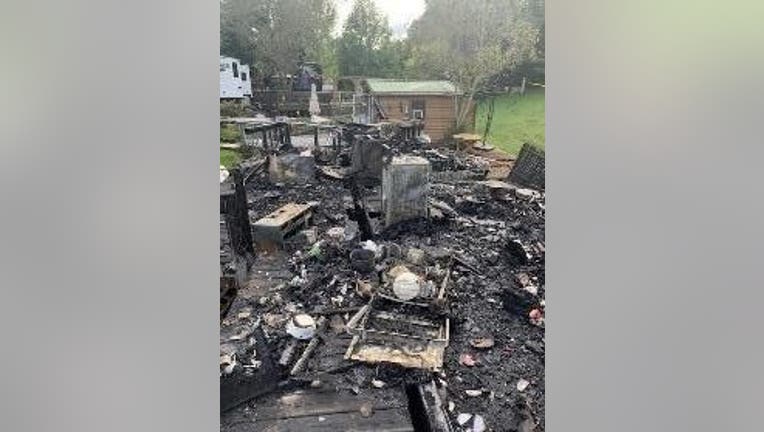 Investigators say the explosion was caused by a disconnected propane gas line. (Office of Insurance and Safety Fire Commissioner)

BLAIRSVILLE, Ga. - An explosion from an accidental fire at a Union County home killed one woman and injured four others Tuesday afternoon.

The Office of Insurance and Safety Fire Commissioner told FOX 5 the fire happened around 1 p.m. at the home on the 500 block of Vista Circle in Blairsville.

According to officials, the explosion happened when an elderly couple attempted to light the kitchen stove in the camper they were using as their home. The couple did not know that the propane gas line was disconnected.

“Because of the explosion, the wife received burns on over 90 percent of her body, and the husband also received very severe burns,” said Commissioner John F. King.

The husband and wife were both airlifted to Grady Memorial Hospital, where the wife died overnight.

Three neighbors also received lesser burns while trying to rescue the couple from the fire. One of the neighbors managed to pull the woman from the flames but had to be airlifted to Grady as well due to their injuries. The other two were treated at a local hospital.

“If it was not for the bravery of these neighbors, both the husband and the wife may not have survived Tuesday’s explosion,” King said.

Officials say the investigation into the fire indicates that the propane company followed procedure and is not at fault, so the cause is believed to be accidental.

Investigators are not releasing the identity of the woman or the four others who are injured at this time.

This is the 61st death from fire in Georgia this year.