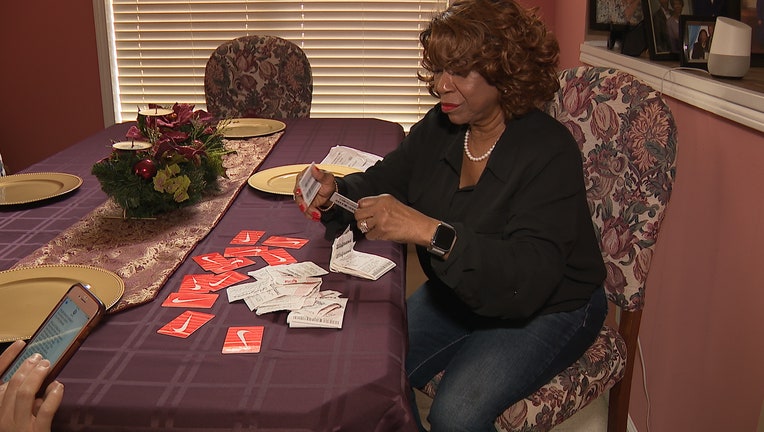 GWINNETT COUNTY, Ga. - A Buford woman is out more than $4,000 after she said she fell victim to an elaborate scam.

Carolyn Buffington, 74, said a close friend reached out to her on Facebook messanger more than a week ago to tell her that her Facebook account had been hacked and she had changed her phone number.

Then the "friend" started to send Buffington text messages from that new number.  She told Buffington about a new $200,000 grant program she had just enrolled in to help pay her bills and suggested that her friend do the same.

"There are so many things I've been talking about doing in my home, you know, painting, getting floors put in.  My car has got a few issues and I thought, you know, this is a blessing for me and not realizing it was a scam" said Buffington.

Police are warning of an uptick in gift card scams

Buffington said an "agent" from the grant program then started sending her text messages about how to enroll.  The so-called agent told Buffington she had to buy hundreds of dollars in Nike gift cards to pay the start up fees for the grant.

After handing over thousands of dollars in "fees," Buffington said the scammers came up with more reasons she needed to send them money and she quickly realized there really was no grant.

"How could anybody be so cruel, so selfish and so ruthless to do that to another person?" Buffington wondered.

Buffington filed a report with the Gwinnett County Police Department and reached out to Nike to see if anything could be done, but the scammers had already spent all the money on the cards.

"There's a lot of red flags and it doesn't just happen around the holiday times.  It happens year round," explained Gwinnett Police Cpl. Michele Pihera.

Cpl. Pihera said scammers often use different stories or tactics to convince victims to send money, like telling them they have a loved one in trouble or an outstanding IRS debt.  She said anyone asking for payment in gift cards, however is a common theme and should be a warning sign.

"These people are very good manipulators," said Cpl. Pihera.  "They know exactly what to say.  They know how to make people afraid that a government agency is coming to come after them, but they are not legitimate."

Pihera said if you recieve a call or a text from a number you do not recognize, you should ignore it and not engage with whoever is on the other end.

Buffington said she now realizes she should have called her friend to verify that she was, in fact, the one she had been texting.  She hopes others will learn from her mistake.

"Make sure before you do anything, before you respond even back to a text or even a media, make sure you know who you're dealing with, because if you don't it's going to cost you like it did myself and I'm grateful--it could've been worse," said Buffington.