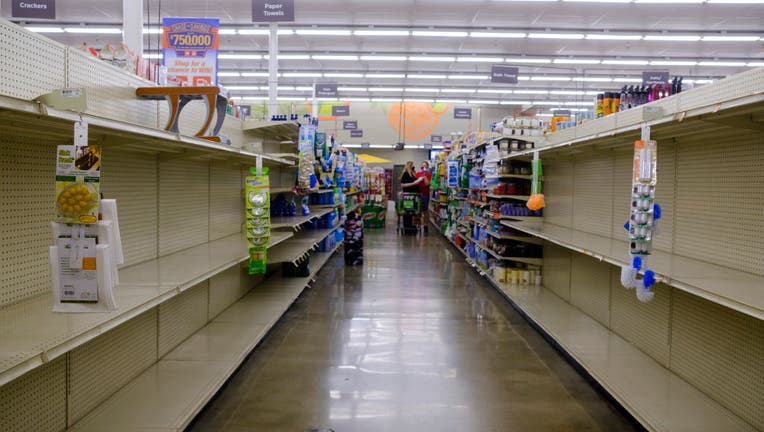 Toilet paper shelves are empty at a Save Mart supermarket during the Covid-19-Coronavirus emergency in Porterville. (Photo by Jeremy Hogan/SOPA Images/LightRocket via Getty Images)

Grocers are looking to beef up their inventory ahead of the upcoming holiday shopping season and in preparation for a potential second wave of COVID-19.

According to the Wall Street Journal, Associated Food Stores has recently started building “pandemic pallets” to ensure cleaning and sanitizing products are readily available in its warehouses to prepare for high demand through the end of the year.

“We will never again operate our business as unprepared for something like this,” Darin Peirce, vice president of retail operations for the cooperative of more than 400 stores told the outlet.

RELATED: Tips for getting groceries during COVID-19 pandemic

In addition, Hy-Vee CEO Randy Edeker, who oversees a chain of more than 240 supermarkets in the Midwest, told the Journal the company is stockpiling additional sanitizing, cleaning, and paper products when possible, though full variety hasn't returned.

Also building up their inventory ahead of the holidays is Ahold Delhaize, owner of the Giant and Food Lion chains, which said to be storing 10% to 15% more inventory than it did before the pandemic to ensure it won’t run out of fast-selling items.

Grocery stores aren't the only ones concerned about potential shortages as food producers have also revealed that they too are stocking up on their most popular products.

Hormel Foods CEO James Snee noted in the company's third-quarter earnings call that while the company isn't seeing COVID-19 outbreaks, it is still making "significant increases" in some of its core center store items such as pepperoni, bacon, SPAM, as the company seeks to mitigate the risk of disruptions from a potential second wave of the virus.

Meanwhile, Campbell's Soup CEO Mark Clouse said in the company's fourth-quarter earnings call that total inventory recovery is "about halfway done." He noted that the company is focused on stocking up on its soup brands as well as popular snacks like Pepperidge Farm Goldfish Crackers and Kettle and Cape Cod potato chips ahead of the winter season and that it will likely be fully restored within the first half of the year.

The bakery and restaurant chain launched its new grocery delivery service on Wednesday, allowing customers to restock their kitchen while ordering food.

"A lot of this is going to boil down to how much capacity we're able to generate," he added. "So certainly, we hope we're going to push above that."

Walmart has also acknowledged the impact the pandemic has had on inventory, noting that it has been working to build up its grocery section after starting out from a "very lean position."

"Who would have known you were going to enter into a pandemic, where probably having a little more inventory would have been helpful, and we've been playing catch-up a little bit through the second quarter and some into the third quarter," Walmart Chief Financial Officer Brett Biggs said during Goldman Sachs' Global Retailing conference earlier this month.

There are currently more than 7 million confirmed cases of COVID-19 in the U.S. and more than 204,000 people have died from the virus, according to the latest update by Johns Hopkins University.