GRIFFIN, Ga. - The Griffin Police Department is searching for the person who abandoned a dog that was found emaciated and sick in the police department parking lot on Tuesday.

The dog, now named Ed, was taken to the North Griffin Animal Hospital for care.

Authorities are searching for the owner of an abused dog

"He knew we were going to help him," said vet tech Emily Natale.

This abandoned dog was nicknamed Ed because the staff thought he resembled a hyena from The Lion King with his horrible skin rash. Soon, they're hoping Ed will have a new look and a new home.

He has all kinds of medical problems, including fleas, ticks, heartworms, and a severe skin infection. Vets say all this will take months to heal.

"Who knows how long he was out there fending for himself," said Natale. 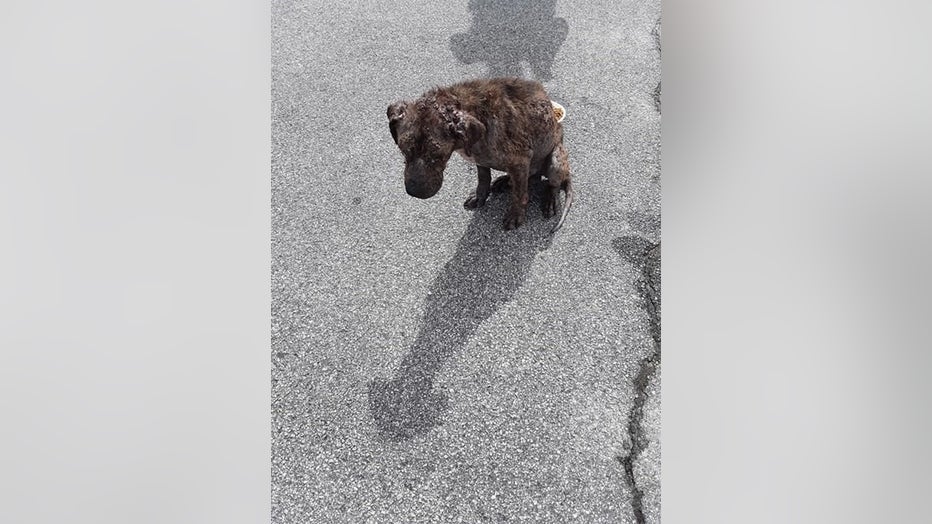 Griffin Police said whoever abandoned the dog will face charges, but members of the community have already rallied around the dog to make sure he's never on his own again.

"I came by here to get on the list, and I'm sure there are a lot of people who will be on the list who want to take care of this little guy," said Thomas Eads who wants to adopt the dog.

The veterinary staff said they see cases of neglect far too often, but they'll do whatever it takes to nurse this pup back to health.

"We have such a close heart to four-legged guys like this who can't speak for themselves or fend for themselves, and they need our help," said Natale.

With that help, the vets say Ed should be just fine.

"He can make that full recovery and find a forever home and be cuddled on the couch with someone very soon," said Natale.

Anyone who would like to donate to help Ed recover, call the Griffin North Animal Hospital at 770-227-4125. All donations will go directly towards his rehabilitation.

Anyone with information on who this dog belonged to, please contact the Griffin Police Department at 770-229-6450 or call 911 and have an officer contact you.