ATLANTA - For the first time, Gov. Brian Kemp spelled out some of the specific ways he hopes to tighten next year's state budget.

For the first time, Governor Brian Kemp spelled out some of the specific ways he hopes to tighten next year's state budget.

Speaking at a joint House and Senate budget hearing Tuesday morning, the governor highlighted some of his plans to reduce expenses.

"First, the Department of Community Supervision was able to find almost $1.3 million in savings by increasing its use of mobile technology," Kemp said.

Kemp also explained that the implementation of a new timekeeping system will save "a whopping $16 million" in overtime at the Department of Corrections next year.

Kemp's motivation for the cutbacks is threefold. The state has experienced falling tax revenues in recent months. In addition, Kemp pledged to make state government leaner and more efficient while running for governor back in 2018 and cuts in some areas will make room for him to spend money on his priorities in other areas, specifically education and public safety.

Under his budget proposal, the state's public school teachers would get an additional $2,000 raise next year – the second portion of his $5,000 campaign promise. Kemp has also included $45 million in the budget for a $1,000 raise for full-time state employees who make less than $40,000 per year. 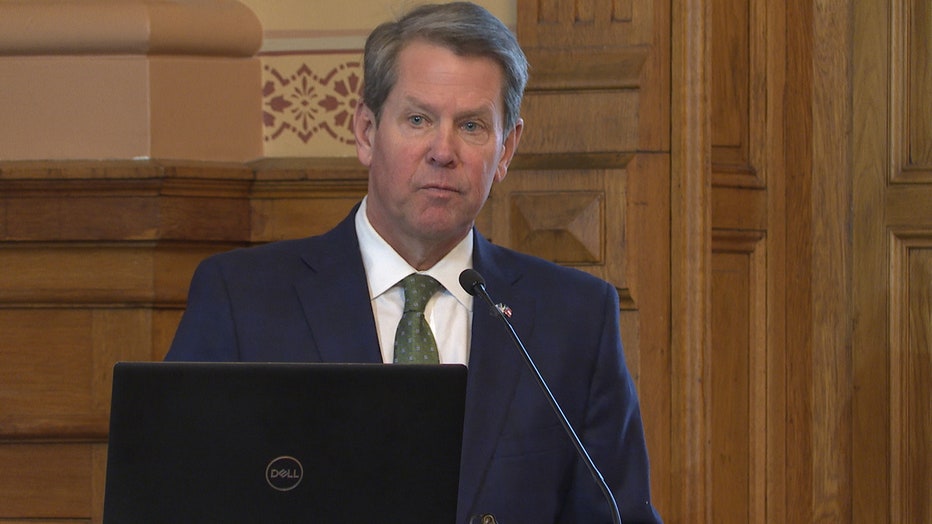 Georgia Governor Brian Kemp walks lawmakers through his budget proposals at a joint hearing on January 21.

"I'm proud of the common sense savings included in this budget," Kemp told lawmakers. "I believe that we've shown taxpayers that we're good stewards of their hard-earned money and with this blueprint, we will continue to build a state that Georgia will be proud to call home."

Many lawmakers support the idea of teacher pay raises and some of Kemp's other proposals, but State Rep. Roger Bruce, D-Atlanta, said he is concerned about the possible cuts the governor did not highlight in his remarks.

House Minority Whip William Boddie said this is probably the tightest budget year since the recession and finalizing the numbers will be time-consuming.

"We're going to have to spend really, every day going through the budget and it's going to be a big-ticket item," Boddie said. "We have to be honest, there are some legislative initiatives that may not get passed because the budget's going to suck the air out of the room and rightfully so."

Budget hearings are scheduled through Thursday at the State Capitol.