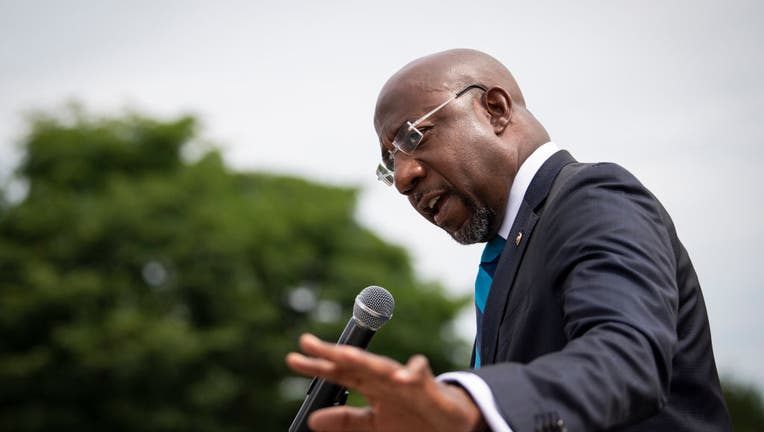 Sen. Raphael Warnock, speaks at a rally, hosted by the Declaration for American Democracy coalition, calling on the Senate to pass the For the People Act. (Photo by Caroline Brehman/CQ-Roll Call, Inc via Getty Images)

ATLANTA - The National Republican Senatorial Committee will run an ad in Georgia during the MLB's All-Star Game and Home Run Derby criticizing Sen. Raphael Warnock over the fact the MLB moved the event from Atlanta to Denver over Georgia's election security law.

The ad, first obtained by Fox News, will run during both the Home Run Derby on ESPN Monday, July 12 and the All-Star Game itself the following day, which will air on Fox. The NRSC told Fox News that the ad buy will cost about $100,000 in total.

"The All-Star Game, a $100 million boost to Georgia's economy, until the radical left woke crowd took it all away, forcing the MLB to boycott Georgia," the ad says. "Even Stacey Abrams opposed the boycott, but Sen. Warnock refused to oppose it."

Warnock, D-Ga., did not explicitly call for the All-Star Game to leave Georgia. He tried to take a moderate position between supporting those who were upset about a law that Democrats called voter suppression and not explicitly advocating for action that could hurt his constituents economically.

"I think we all have to use our voices," he said on CNN when asked whether boycotts of big events in Georgia should be options for activists.

And he said that businesses should not boycott Georgia in a tweet after the MLB decided to move the All-Star Game, while blaming Republicans for Georgia missing out on the potential economic gain.

"It wasn’t the people or workers of GA who crafted SB 202—it was politicians seeking to retain power at the expense of Georgians' voices. And today’s decision by @MLB is the unfortunate consequence of these politicians’ actions," Warnock said in early April when the MLB decided to move its game to Denver.

"I hope businesses, athletes & entertainers can protest this unjust law not by leaving GA, but by coming here & fighting voter suppression head on with the community," Warnock added. "And the urgency to pass federal voter protection laws, which I’m fighting hard for, grows every day."

But Republicans still place the blame for the economic hit of the MLB's move squarely with Warnock and other Democrats, who they say were not forceful enough in their opposition to boycotts of the state.

"Sadly, it was their very own Senator who helped run the All-Star Game and $100 million out of Atlanta," NRSC Chairman Sen. Rick Scott, R-Fla., said in a statement. "Even Stacey Abrams, after initially supporting boycott efforts, changed her tune and vocally opposed a boycott of Atlanta and its small businesses. But Raphael Warnock refused to condemn this boycott that hurt Georgia families."

Warnock won his seat in a runoff election in January but will have to face voters again next year because his race was a special election to replace retired Sen. Johnny Isakson, R-Ga. Republicans see Warnock as one of the most vulnerable Democratic incumbents going into the midterms.