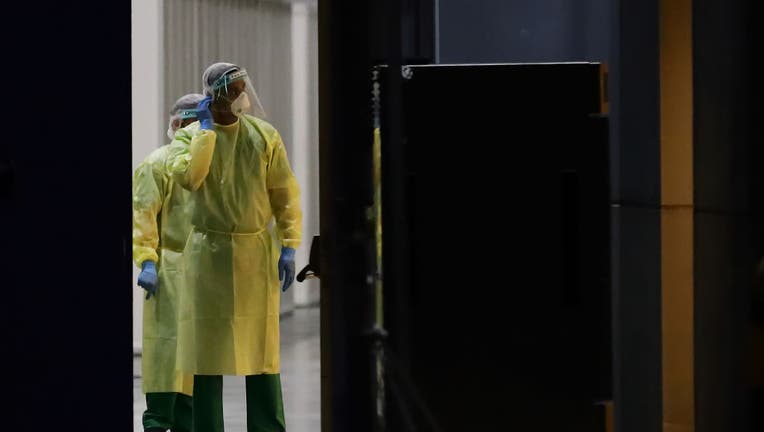 SINGAPORE - APRIL 10: Personnel dressed in Personal Protective Equipment (PPE) are seen at the door of the community isolation facility at Singapore Expo on April 10, 2020 in Singapore. The Ministry of Health reported 198 new coronavirus disease (COV

The number of deaths that have been attributed to COVID-19 worldwide crossed 100,000 on Friday, according to the most recent data from Johns Hopkins Coronavirus Resource Center.

There have been more than 360,000 reported recoveries across the world from the virus.

Christians around the world observed a Good Friday like no other, at home watching livestreams instead of at church, as pressure mounted on governments to restart some industries and fend off further economic devastation from the coronavirus.

Politicians and public health officials warned the public against letting the virus come roaring back by relaxing social distancing over the Easter holiday weekend, and they urged Christians to celebrate the holiday safely at home. Authorities resorted to using roadblocks and other means to discourage travel.

The House was already preparing to boost a small business program as part of a broader $1 trillion package as a follow-up to the sweeping $2.2 trillion rescue that became law in late March.

In Italy, officials used helicopters, drones and stepped-up police checks to make sure people don’t slip out of their homes over the holiday. On Thursday alone, police stopped some 300,000 people around Italy to ensure they had permission to travel. About 10,000 were given summonses.

Some churches held virtual services online, while others arranged prayers at drive-in theaters. In locked-down Paris, fire-scarred Notre Dame Cathedral came back to life briefly, days before the first anniversary of the April 15 inferno that ravaged it. Good Friday observances led by the archbishop were broadcast live from the nearly empty, closed-to-the-public cathedral.

In addition to the lives lost, the pandemic has slammed economies around the world. The head of the International Monetary Fund warned that the global economy is headed for the worst recession since the Depression.