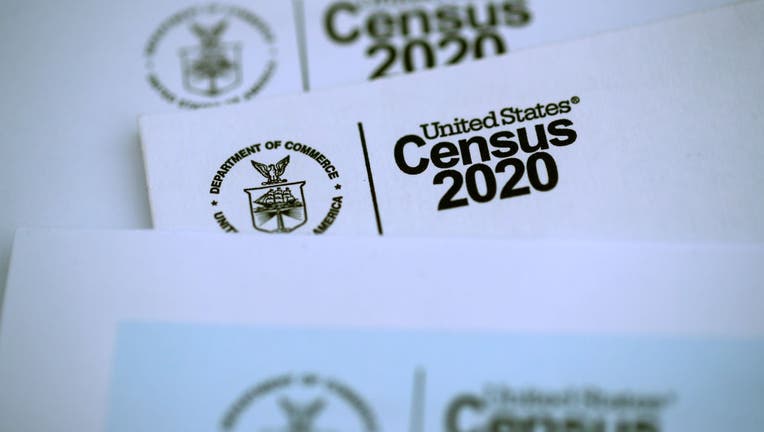 The U.S. Census logo appears on census materials received in the mail with an invitation to fill out census information online. (Justin Sullivan/Getty Images)

ATLANTA - Georgia ranks second to last in the country for the response to the 2020 U.S. Census, and officials warn the low response rate could lead to the loss of federal funds.

Georgia so far has the second-lowest percentage of households responding - through self-response or follow-up contact - of any state in the country with the rate of 82.1% as of Sept. 10, according to numbers from the U.S. Census. That compares to the national percentage of 90.1.

The only state with a lower percentage of households is Alabama at 81.5%. Louisiana had a response rate of 82.7%. Montana also ranked in the bottom five with 82.3%. South Carolina was in the bottom 10 with a rate of 83.2%.

The 2020 Census will be used to determine how federal dollars are distributed and how many congressional seats each state will get. State officials are making public pleas for people to complete the Census, using public service announcements with celebrities and even a contest to try to boost participation.

Alabama Gov. Kay Ivey this week told people that it was “now or never” to complete the Census

“I’ve said it since our March kick-off, and I will say it again: Alabama stands to lose too much if we do not reach our goal of maximum participation,” Ivey said.

Alabama officials have long expressed concern that the state could lose a congressional seat. U.S. Sen. Doug Jones of Alabama on Friday also urged people to respond to the Census if they haven’t already.

Giles Ward, a former state senator in Mississippi, spent a year as head of a committee assigned to encourage people to respond to the Census. Ward said Friday that the state could receive about $5,000 per person, per year, from the federal government for various programs. “We just have to hope and believe that people are going to take the civic responsibility to respond,” Ward said.

Award-winning actor Morgan Freeman, who lives in Mississippi, appeared in a public service announcement urging people in the state to respond to the Census. “Millions of dollars for Mississippi families, children, schools, health care, roads and bridges are at stake,” Freeman said.