A federal judge in Georgia has blocked President Joe Biden’s administration from enforcing a COVID-19 vaccine mandate for employees of federal contractors, the latest in a string of victories for Republican-led states pushing back against Biden’s pandemic policies.

AUGUSTA, Ga. - A federal judge in Georgia has blocked President Joe Biden’s administration from enforcing a COVID-19 vaccine mandate for employees of federal contractors, the latest in a string of victories for Republican-led states pushing back against Biden’s pandemic policies.

The order came in response to a lawsuit from several contractors and seven states -- Alabama, Georgia, Idaho, Kansas, South Carolina, Utah and West Virginia. It applies across the U.S. because one of those challenging the order is the trade group Associated Builders and Contractors Inc., whose members do business nationwide.

Baker found that the states are likely to succeed in their claim that Biden exceeded authorization from Congress when he issued the requirement in September.

"The Court acknowledges the tragic toll that the COVID-19 pandemic has wrought throughout the nation and the globe," wrote the judge, an appointee of former President Donald Trump. "However, even in times of crisis this Court must preserve the rule of law and ensure that all branches of government act within the bounds of their constitutionally granted authorities."

A White House spokeswoman said the Justice Department would continue to defend the mandate.

"The reason that we proposed these requirements is that we know they work, and we are confident in our ability, legally, to make these happen across the country," White House press secretary Jen Psaki said at Tuesday’s briefing. 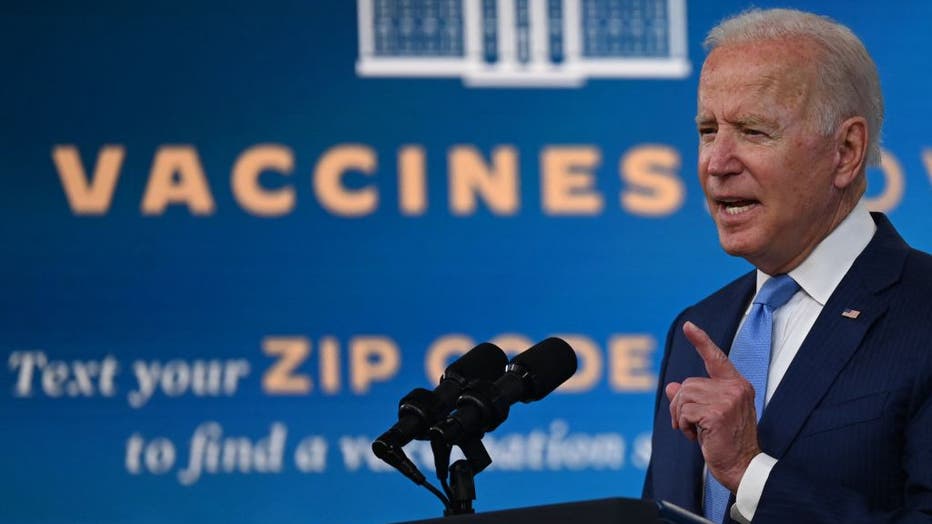 President Joe Biden delivers remarks on the Covid-19 response and the vaccination program at the White House. (Photo by JIM WATSON/AFP via Getty Images)

A federal judge in Kentucky also had issued a preliminary injunction against the mandate last week, but it applied only to contractors in three states that had sued together -- Kentucky, Ohio and Tennessee.

Biden issued an executive order Sept. 9 requiring federal contractors and subcontractors to comply with workplace safety guidelines developed by a federal task force. That task force subsequently issued guidelines that new, renewed or extended contracts include a clause requiring employees to be fully vaccinated by Jan. 18. That meant those receiving a two-dose vaccine must get their second shot by Jan. 4.

Limited exceptions were allowed for medical or religions reasons. The requirements would apply to millions of employees of federal contractors, which include defense companies and airlines.

Georgia Gov. Brian Kemp, a Republican, applauded the ruling on Twitter saying "Georgia is now 3 for 3 in our fight against Biden's unconstitutional vaccine mandates. Kemp also said the ruling will provide relief to workers "who were in fear of being forced to choose between this vaccine and their livelihood."

With Tuesday’s ruling, all three of Biden’s broad vaccine mandates affecting the private sector have been put on hold by courts. Judges already issued a stay regarding one that applies to businesses with 100 or more employees and another for health care workers across the U.S.

Separately, Biden has imposed vaccine requirements for employees of the federal government and the military.

The White House has vowed to defend the mandates and is confident in the end they'll be upheld.

The mandates are a key part of the administration’s strategy to stop the spread of COVID-19, which has killed more than 788,000 Americans since last year.

With the mandates on hold, health officials are urging everyone to get vaccinated and boosted as soon as possible.