The officer's quick thinking at the Gwinnett County YMCA helped save a grandmother's life who collapsed from a full cardiac arrest.

GWINNETT COUNTY, Ga. - A Georgia Gwinnett College police officer is being called a hero after saving an unconscious woman's life with her quick thinking and medical training.

Ashley Still was working out at the Winder Barrow Brad Akins YMCA when an employee rushed up to her. The employee knew that Still was a first responder and told her that a woman had collapsed near the swimming pool.

As soon as she saw the woman, Still says she knew immediately that she had suffered a full cardiac arrest.

"She had no pulse and was displaying agonal gasps. I went to straight hands-on CPR, working with the team of people that were there," Still said.

Using the club's Automated External Defibrillator, Still began to lead the effort to resuscitate the woman with CPR.

"The training definitely just kicked in. So many times repetitively teaching about it – it just took over," Still said.

After one shock with the defibrillator, the woman's heart began beating again. Still have saved her life.

Still says that the woman had come to watch her grandkids at a swim lesson, saying the fact that they both were there when the attack happened was "at the right place at the right time."

"The fact she’s here to see her grandkids another day – that’s all that matters to me," she said. 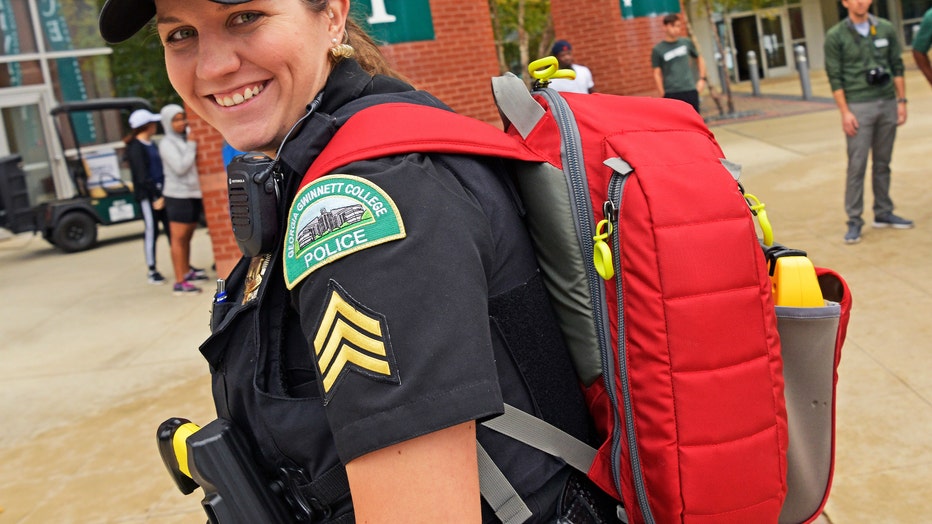 Still, a resident of Monroe, Georgia, been an officer at Georgia Gwinnett College for six years. Before that, she was a student at the college who trained in nursing, psychology, and criminal justice.

As someone whose dad passed away due to a heart attack, Still has become an advocate on campus for AED machines in building and patrol cars.

"My sister passed in 2014 and my dad passed two years later. The knowing of loss is the driving factor for the medical stuff that I like to teach. I love anything preventative, so if I can prevent loss, or hurt, or sadness — whether it’s crime or health-related — that’s my ultimate goal," she said.