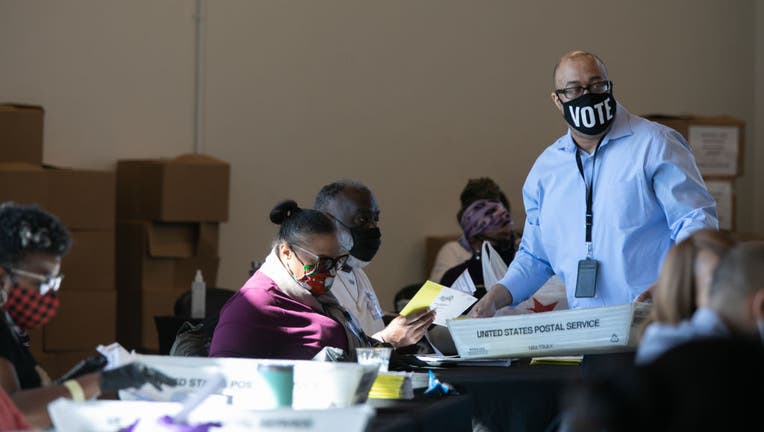 Fulton County elections workers Ruby Freeman and Wandrea "Shaye" Moss, a mother and daughter, filed the lawsuit against The Gateway Pundit, its owner Jim Hoft and his brother Joe Hoft, a contributor to the site. Among other things, the lawsuit says the website and the Hofts conducted a "campaign of lies" that led to online and in-person harassment against the two women.

The falsehoods "have not only devastated their personal and professional reputations but instigated a deluge of intimidation, harassment, and threats that has forced them to change their phone numbers, delete their online accounts, and fear for their physical safety," the lawsuit says

In response to a call to a cellphone number listed for Jim Hoft, The Associated Press received a text message saying, "Sorry, I can’t talk now." No one responded to a voicemail or text message sent to that number. A working number for Joe Hoft could not be located. No one responded immediately to a request for comment sent through an online form on The Gateway Pundit’s website.

Angered by his narrow loss in a traditionally Republican state, former President Donald Trump focused intense scrutiny on Georgia, making unproven claims that widespread fraud there led to his loss in the state.

A representative from Trump’s legal team, Jacki Pick, spoke before a Georgia state Senate committee on Dec. 3, 2020, and showed part of a surveillance video from the room where ballots were counted at State Farm Arena in Atlanta. She said Republican observers were asked to leave the room late on election night and that once they were gone, election workers pulled out and counted hidden, fraudulent ballots, the lawsuit says.

Pick did not name the election workers in the video "but said ‘one of them had the name Ruby across her shirt somewhere,’" the lawsuit says. Later that day, The Gateway Pundit was the first outlet to publish Freeman’s full name, and in a subsequent story it also identified Moss, the lawsuit says.

Fulton County DA Fani Willis said there is an ongoing investigation into allegations that former President Donald Trump attempted to interfere with vote counting during the 2020 Election in Georgia. The allegations stem from a phone call he made to Secretary of State Brad Raffensperger. Trump has not been charged with a crime in Georgia.

The allegation that "suitcases" of ballots were pulled from under tables away from the eyes of observers was almost immediately debunked. But it continues to circulate among supporters of the former president and others who say the election was marred by fraud.

The Gateway Pundit and the Hofts perpetuated the debunked narrative, publishing stories and promoting them on social media even after they were aware it had been disproven, the lawsuit says. Among other things, the suit says, their stories accused Freeman and Moss of conspiring to get observers out of a room where ballots were being counted, adding illegal ballots to the count and running the same ballots through scanners multiple times.

In a phone call with Georgia Secretary of State Brad Raffensperger on Jan. 2, Trump pressed the Republican official to "find" votes for him and mentioned Freeman by name, calling her "a vote scammer, a professional vote scammer and hustler."

Freeman worked as a temporary election worker during the 2020 election, verifying signatures on absentee ballots and preparing them to be counted and processed. Moss has worked for the Fulton County elections department since 2012 and supervised the absentee ballot operation during last year’s election.

As the allegations against her began to spread, Freeman received hundreds of emails, dozens of text messages and threatening phone calls, and strangers showed up at her house, the lawsuit says. The FBI concluded on Jan. 6 that she wouldn’t be safe in her home, and she relocated for two months. She had to abandon her pop-up clothing boutique because she had to close its social media accounts and couldn’t attend events in person.

Moss’ teenage son was bombarded with threatening and racist messages after harassers found her old phone number, which he had taken over, the lawsuit says. Because she had previously lived with her grandmother, the suit says, strangers showed up at her grandmother’s house at least twice and tried to enter to make a "citizen’s arrest." Moss used to enjoy the parts of her job that involved interacting with the public but now becomes anxious if they ask her name, the lawsuit says.

The lawsuit filed in circuit court in St. Louis, where The Gateway Pundit is based, seeks compensatory and punitive damages, as well as legal costs. It also asks a judge to declare that the statements published by the website and the Hofts and mentioned in the suit are false and to order the false and defamatory statements removed from any website or social media accounts they control.