ATLANTA - Christmas can be tough for kids in the hospital, especially this year amid the pandemic. That’s why nine-year-old Nicky Scaravaglione wanted to bring some holiday joy to them.

The Dunwoody fourth-grader raised $2,200 that he used to buy presents for kids at Children’s Healthcare of Atlanta. He said he came up with the idea one day he was driving home from football practice when he realized not everyone is able to have the Christmas he does.

"He started thinking about what he could do to help some people," his mom Brandy said. "He realized there was a need at the hospital that there are kids who are in the hospital over the holidays." 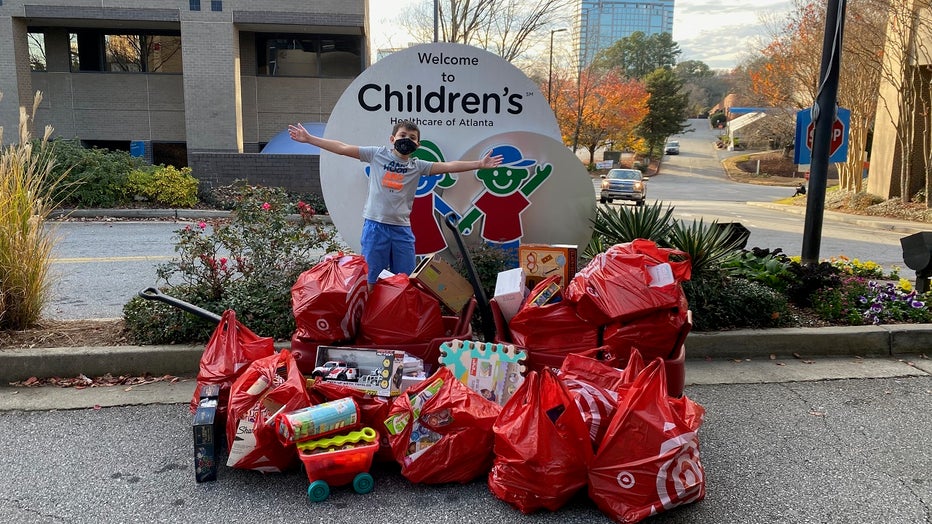 "I was just thinking that, like a lot of people in Dunwoody, they like dogs," Scaravaglione said. So, the kindhearted fourth-grader began asking neighbors for photos of their dogs, which, with the help of his mom, he compiled into a 2021 calendar.

"I was very surprised that we sold all of them," he said. His mom said in total, they sold about 150 calendars at $20 apiece, $25 if they needed to be shipped. They took the $2,200 they raised to Target and stuffed several carts with toys to bring the kids some holiday joy.

Nicky said while he was going door to door in a friend’s neighborhood, he happened to ring the doorbell of none other than rapper Waka Flocka Flame.

A Dunwoody fourth-grader collected money from his neighborhood, including a generous donation from Waka Flocka Flame, to buy presents for patients at Children's Healthcare of Atlanta.

He said the rapper loved the concept and welcomed them in.

What Waka Flocka did next made his jaw drop.

"He bought one calendar and his friend did too," Scaravaglione recounted. "But instead of giving each twenty dollars for the calendar, he gave me a one hundred dollar bill."

Brandy said they were not able to go in to hand-deliver the toys because of COVID-19 restrictions, but the hospital staff was grateful for the large donation.

"There were immediate needs," Brandy said. "The nurses and staff were already pulling out of the wagon gifts for patients that were there that day."

Even though it’s too late to donate Christmas presents at this point, CHOA has a wish list on its website of toys and other items they could use year-round.