Every year, thousands of people head to Yosemite National Park in California and make their way to Horsetail Fall on the eastern side of El Capitan, hoping to catch a glimpse of something spectacular.

At the end of February, the setting sun hits Horsetail Fall at an angle that illuminates the top of the waterfall, making the flowing water look molten. 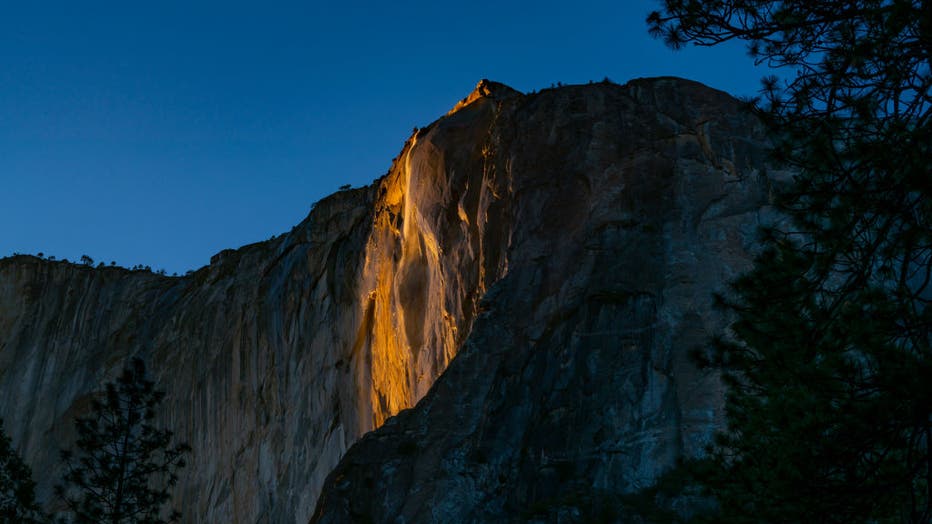 General views of the Yosemite Firefall natural phenomenon at Horsetail Fall ending in a pinkish hue on February 24, 2021 in Yosemite, California. (Photo by AaronP/Bauer-Griffin/GC Images)

Horsetail Fall isn't as popular as the more well-known Yosemite Falls or Bridalveil Fall, but it's still quite impressive. Water drops 2,130 feet to the ground below. It's fed entirely through snowmelt and runoff, so during the summer months, it dries up completely.

In fact, the Yosemite Mariposa County Tourism Board describes Horsetail Fall as one of the park's "less-remarkable waterfalls."

However, if all the conditions align perfectly, it's a sight that can never be forgotten.

First, there needs to be enough water in Horsetail Fall. It also needs to be warm enough during the day to melt snow. And it can't be too cold as the sun is setting, or visitors won't be able to see flowing water since it would be frozen.

There also needs to be clear skies for the sun to shine on the waterfall.

Anyone hoping to catch a glimpse of Firefall at Horsetail Fall needs to know that permits and parking reservations are required. For more information, click here.