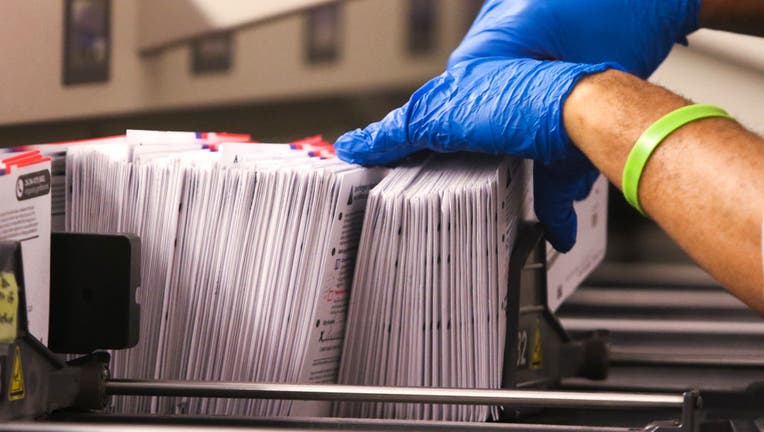 An election worker handles vote-by-mail ballots coming out of a sorting machine for the presidential primary at King County Elections in Renton, Washington on March 10, 2020. (Photo by JASON REDMOND/AFP via Getty Images)

An investigation by the secretary of state's office found five of the ballot requests were changed from Democrat to Republican with a black ink pen, according to a federal affidavit.

Absentee ballots have become a political flashpoint nationally in recent weeks, often along partisan lines. Some state governors have moved to make absentee ballots more available in this year's elections because of concerns about the spread of the coronavirus. Other elected officials, including President Donald Trump, have raised concerns that expanding the practice would increase the likelihood of election fraud. Examples of mail-in ballot fraud have been minimal, and Trump himself has voted absentee in recent elections.

Absentee ballot applications were mailed to all registered voters in West Virginia last month in a bid to encourage mail-in voting during the coronavirus pandemic.

On the other three requests, the voters’ party was not changed. However, in addition to the “Republican” box originally checked in blue ink, the word “Republican” was later circled in black ink, the affidavit said.

Cooper, 47, of Dry Fork, held a postal contract to pick up mail in the three towns in which the voters live, the affidavit said.

Cooper admitted in an interview with Cogar and a postal inspector that he changed some of the requests he picked up from the Onega post office from Democrat to Republican.

According to the affidavit, when he was then asked about the other requests, Cooper said, “I'm not saying no,” but if the requests were picked up along his postal route, “I would take the blame.” Cooper was then asked if he was “just being silly” and he replied he did it “as a joke” and that he didn't know those voters.

It wasn't immediately clear whether Cooper has an attorney who could comment on the charge on his behalf.