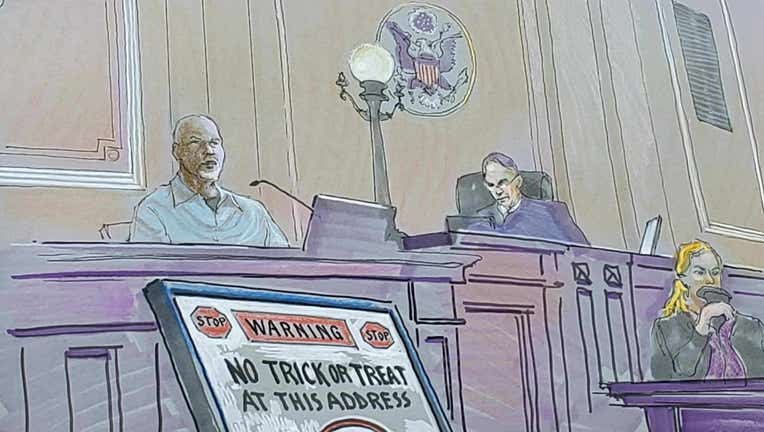 MACON, Ga. - In a hearing that lasted more than three hours, a federal judge heard testimony and arguments Thursday in a lawsuit by sex offenders against a middle Georgia sheriff's office.

A group of registered sex offenders has sued the Butts County Sheriff's Office and Sheriff Gary Long to try to prevent deputies from placing signs near their homes that warn trick-or-treaters away.

"It's just one more way of singling out these particular individuals, none of whom are on probation or parole," said attorney Mark Yurachek, who represents the three plaintiffs.

Yuracheck argued the signs violate his client's First Amendment rights because they are "compelled speech," a message the government is allegedly forcing them to display without their agreement.  He believes it is an overreach to post signs when there are other ways for the public to get information about sex offenders living in their communities.

Attorneys representing the sheriff's office, however, said the signs are government speech on the government right-of-way and do not expressly identify the person living at a certain address as a sex offender.

The Sheriff's Office put the signs up for the first time in October 2018.  They read, "WARNING! No trick-or-treat at this address. A community safety message from Butts County Sheriff Gary Long."

"We are protecting our children and following Georgia Law by placing these signs," said Sheriff Long in a Facebook post earlier this week.

Both he and his attorney declined to comment on the case, pending the judge's ruling.

"It's a balancing test and that's what makes this case so difficult," said U.S. District Court Judge Marc Treadwell during the hearing.

On the one hand, Treadwell said, the government has a compelling interest in protecting children, but on the other, the sex offenders impacted are no longer in jail and have paid their debt to society.

Judge Treadwell gave both sides a deadline of 5 p.m. Friday to submit any additional documents or materials for his consideration.