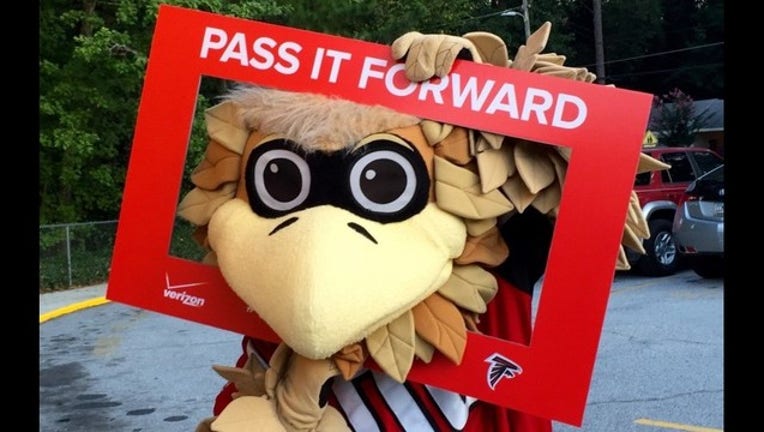 ATLANTA, Ga - The Atlanta Falcons and Verizon Wireless will be surprising drivers with free gas again today in part of its "Pass It Forward" campaign.

Freddie the Falcons and Falcons cheerleaders will be at the new RaceTrac on Mansell Road in Alpharetta at noon handing out $20 pre-loaded RaceTrac gift cards and encouraging recipients to “pass it forward” with their own random acts of kindness.

In addition, Verizon Wireless will also be hosting a HopeLine phone drive at Falcons Landing this Sunday before the 1:00 p.m. game versus the Washington Redskins. Attendees are invited to donate used cell phones and accessories to support victims of domestic violence in Georgia. In exchange for every donated device, Verizon will give away a branded Falcons drawstring bag from Verizon Wireless. October is national Domestic Violence Awareness Month.

The Atlanta Falcons and Verizon Wireless hope to create a positive social movement. During the season-long program Falcons players, cheerleaders and mascot will visit random locations across Atlanta and execute acts of kindness to generate goodwill throughout the metro area. Atlantans are encouraged to share their own personal random acts of kindness using the hashtags #VerizonATL and #RiseUp.

During each stop, representatives from Verizon and the Falcons will undertake a variety of activites, including signing autographs, taking pictures and supporting the activities at the chosen location.