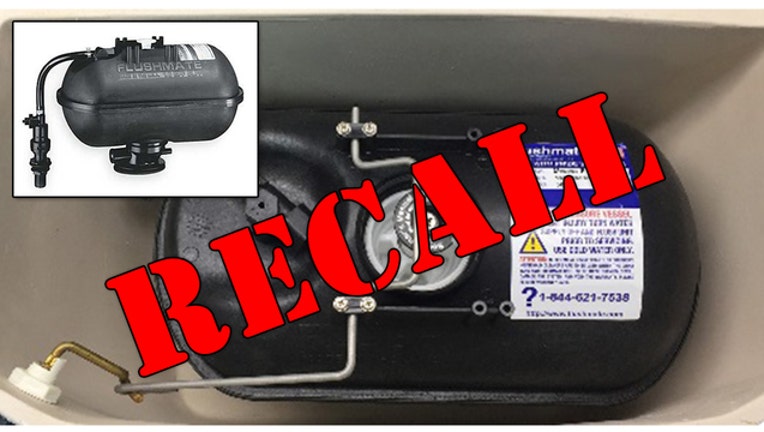 TAMPA (FOX 13) - More than 1.4 million toilet flushers have been recalled following reports of them exploding and bursting toilet tanks.

According to a recall notice posted by the company, Flushmate,” they say the product, Flushmate II 501-B “can burst at or near the vessel weld seam releasing stored pressure…This pressure can lift the tank lid and shatter the tank, posing impact and laceration hazard to consumers and property damage.”

The recall occurs after close to 1,500 reports of flushers. The United States Consumer Product Safety Commission confirmed the toilets have resulted in close to $1 million in property damage and 23 injuries, one of which required surgery to a customer’s foot.

The affected model has not been produced since 2013, but was available at Home Depot or Lowes as late as 2015. Online retailers have also sold the units.

Flushmate urges customers to check the model and serial numbers of their toilets to determine if theirs is one of the recalled products. The company suggests that those who have the affected model should turn off the water supply and release internal pressure by flushing the toilets.

“To uphold our commitment for safety and quality to our customers, Flushmate has announced, in conjunction with the U.S. Consumer Product Safety Commission, a voluntary recall of all Flushmate II 501-B pressure-assisted flushing systems," a spokesperson for Flushmate confirmed to Fox News. "Although Flushmate discontinued shipping the product within toilet fixtures in 2006, when the Flushmate II 501-B became a replacement part, and discontinued the product altogether in 2013, we are communicating with customers who may still own the product to offer a free Flushmate replacement unit and installation by a technician."

The spokesperson added, "We are encouraging all customers to visit our website … or call 1-844-621-7538 to determine if their product is included in the Flushmate II 501-B recall, register their serial number, and request a free Flushmate replacement unit and installation.”