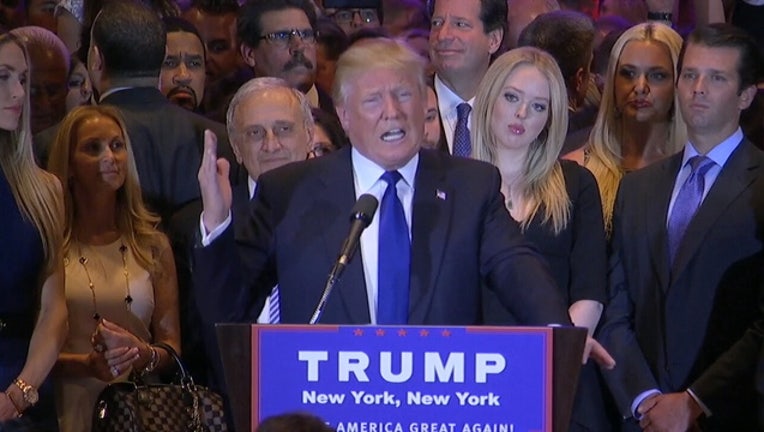 WASHINGTON (AP) — Voters who say they want to see an outsider inhabit the White House propelled Donald Trump to victory in the Republican primary in his home state of New York on Tuesday night.

On the Democratic side, voters are more likely to see former Secretary of State Hillary Clinton than Vermont Sen. Bernie Sanders as the candidate who can beat Trump. But most said they would vote for either Sanders or Clinton in the general election.

As New York voters headed to the polls, Democrats were more likely than Republicans to say they have been energized by the primary battles within their parties. GOP voters say their party has been divided by the sparring among Trump, Texas Sen. Ted Cruz and Ohio Gov. John Kasich.

According to early results of exit polls conducted for The Associated Press and television networks by Edison Research, a majority of GOP voters say the candidate with the most votes going into the convention should be the party's presidential nominee. And many voters from both parties say they're concerned about the economy and Wall Street.

About 6 in 10 New York GOP primary voters want the next president to be a political outsider— among the most that have said that in any state so far.

Trump also benefited from 6 in 10 voters who say they'd be concerned about or scared of a Cruz presidency. About 4 in 10 said the same about Trump.

Nearly two-thirds of New York Democrats say Clinton is the candidate better suited to beat Trump in a general election. About 7 in 10 Democratic voters think the party's nominee will eventually be Clinton.

But more than 6 in 10 Democratic primary voters say they would be excited or optimistic about either Clinton or Sanders winning the presidency. Nearly 7 in 10 Democratic supporters of each candidate said that they would definitely or probably vote for the other candidate if he or she became the party's nominee.

New York Democrats are about evenly split on whether Clinton or Sanders is more inspiring. But Sanders was more likely to be seen as honest. More than 8 in 10 say Sanders is honest while less than 6 in 10 say that of Clinton.

Close to 6 in 10 Democratic primary voters say Clinton would do the best job handling gun policy.

Nearly 7 in 10 GOP voters say the candidate with the most votes in primary contests should be the Republican presidential nominee. Conversely, just 3 in 10 voters say the delegates sent to the convention in Cleveland should decide.

So far, Trump is likely to go into the convention with the delegate lead over Cruz and Kasich. But the billionaire may not have enough delegates to win the nomination outright.

And voters say the tough primary slog is taking its toll.

Four in 10 Republican primary voters say they wouldn't vote for Cruz in November. About a quarter say that about Trump.

WALL STREET AND THE ECONOMY

Large majorities of New Yorkers — Democrats and Republicans alike — are concerned about the direction of the U.S. economy. And many in both parties are worried about the influence of Wall Street.

Voters who were most worried about the economy were especially likely to support Trump on the Republican side and Sanders on the Democratic side, exit polls show.

About two-thirds of Democrats regard Wall Street as detrimental to the U.S. economy, with the majority of those voters siding with Sanders. About 3 in 10 say the New York City financial sector helps the economy, and those voters went overwhelmingly for Clinton.

GOP voters were nearly even on the question.

The exit poll was conducted by Edison Research for The Associated Press and the television networks. Interviews were conducted with 1,367 Democratic voters and 856 Republican voters at 35 precincts throughout New York State. The margin of sampling error is plus or minus 4 percentage points for Democrats and 5 points for Republicans.