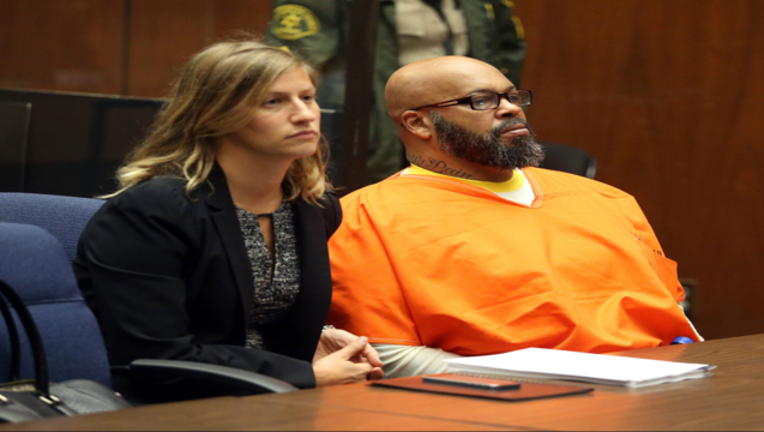 LOS ANGELES (AP) - A judge on Thursday sentenced former rap mogul Marion "Suge" Knight to 28 years in prison for running down and killing a man whose loved ones in court described him as a deeply devoted family man and peacemaker in his community.

The courtroom was filled by nearly two dozen relatives of 55-year-old Terry Carter, including a 96-year-old aunt who like many of them cried and consoled one another.

"He was so much more than the person the defendant killed with his truck," said Carter's sister Jessica Carter, one of eight family members who spoke in court.

Knight pleaded no contest two weeks ago to voluntary manslaughter on the eve of a trial on murder and attempted murder charges that could have resulted in a life sentence if convicted. He wore a large cross and orange jail attire during Thursday's sentencing, which drew to a close a nearly four year court saga over the fatal 2015 confrontation.

He did not look at the family as they spoke of their sorrow and anger.

The victim's daughter Crystal Carter called him a "low-life thug," ''career criminal" and "a disgusting, selfish disgrace to the human species."

"I ask that you sentence this unrepentant, remorseless, cold, callous menace to society to the maximum of 28 years," she said.

Another daughter, Nekaya Carter, said she hopes that the end of the courtroom saga can bring her some peace.

"I wanted justice for my dad and now we've finally got it, kind of," she said. She then addressed Knight directly despite the judge's instructions not to. "My dad can finally rest in peace while you live out the rest of your life in prison."

In January, 2015, Knight had been fighting with a longtime rival, Cle "Bone" Sloan, through the window of his pickup truck outside the burger stand near where promotional filming was being done for the N.W.A. biopic "Straight Outta Compton."

Sloan had worked as an adviser on the film, which portrayed Knight in his early days as the co-founder of Death Row Records.

Knight backed into Sloan with his truck and wounded him before running over Carter, who later died from his injuries.

Knight's numerous defense lawyers had contended he was acting in self-defense.

There have been disputed accounts of why Carter had been at the scene, but his family said he often acted as a community mediator and peacemaker.

"This wasn't no cat who went after nobody," Carter's brother-in-law Damu Visha said in court. "He helped people."

The death was captured on surveillance video, and family members described their anguish in having to see it repeatedly, and chastised the media for showing it so often.

The prison sentence represents the low point of a long decline for Knight, one of the most important figures in the history of hip-hop. At his pinnacle in the mid-1990s, he was putting out wildly popular records that are now considered classics from Dr. Dre, Snoop Dogg and Tupac Shakur.

Shakur was in Knight's car when he was killed in a drive-by attack in Las Vegas in 1996.

He answered procedural questions but did not address the court Thursday.

Voluntary manslaughter would normally bring a sentence of 11 years in prison, but Knight's previous felony convictions including robbery and assault trigger California's three strikes law and take the sentence to 28 years. It wasn't immediately clear how long he would have to serve.

The agreement also clears Knight in two other cases, both from 2014. He was accused of stealing a camera from a woman and of sending threatening text messages to "Straight Outta Compton" director F. Gary Gray.

Family members said they were especially upset to have received no remorse from Knight or his family members.

Los Angeles Superior Court Judge Ronald Coen, who issued the sentence, appeared moved by the family's words and offered his own condolences.

"If it hasn't been said by anyone else, Coen said, "let me tell you, that my heart goes out to you."

Most victim's family members spoke of the need to forgive Knight for their own peace of mind.

"I hope and I pray that we find forgiveness," Terry Carter's cousin Patricia Hawkins said. "But it won't be today."