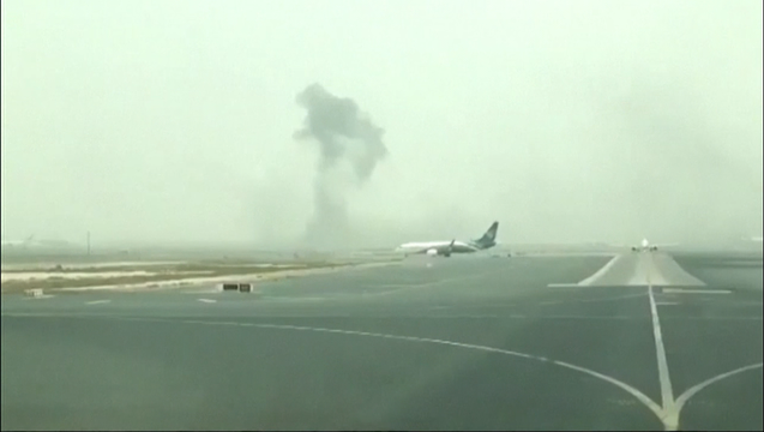 DUBAI, United Arab Emirates (AP) — An Emirates flight from India with 300 people on board crash landed at Dubai's main airport Wednesday, sending black smoke billowing into the air and halting all traffic at the Middle East's busiest airport. There were no fatalities and all the passengers were safely evacuated before the plane was engulfed in a fireball.

Dubai-based Emirates said the accident happened around 12:45 p.m. local time as Flight EK521 was arriving from the southern Indian city of Thiruvananthapuram.

It confirmed that "all passengers and crew are accounted for and safe," but gave no details of what went wrong.

The Boeing 777 was carrying 282 passengers and 18 crew members from 20 different countries, according to the airline. Those onboard included 226 Indians, 24 Britons, 11 Emiratis, and six each from the United States and Saudi Arabia.

The Dubai government's official media office separately said that all passengers were "evacuated safely and no injuries have been reported so far."

It said authorities were "dealing with the incident at the moment to ensure safety of all" and that all departures from the airport had been halted until further notice.

Emirates predicted there would be an eight-hour delay in operations across its network.

"Our main priority at this time is the safety and wellbeing of all involved and full co-operation is being extended to the authorities and emergency services managing the situation," the carrier said.

Video posted online showed black smoke billowing from what looked like an Emirates jetliner lying on its belly on the runway.

Firefighters soon managed to bring the fire under control, with Associated Press journalists at the airport reporting that the charred fuselage of the plane appeared to no longer be burning. The top of the aircraft was scorched brown from near the cockpit back to its tail. Several yellow fire trucks surrounded the plane.

Dubai resident Girisankal Gangadhakan said his wife called him after the plane landed to tell him that she and their three children onboard had been involved in an accident but were safe.

"I was shocked when I heard about that," he said.

The Boeing 777 departed Thiruvananthapuram at 10:19 a.m. and was scheduled to land at 12:50 p.m. local time, according to Emirates.

Thiruvananthapuram is the capital of the southwestern Indian state of Kerala. Many blue-collar migrant workers employed in the United Arab Emirates and other Gulf nations come from Kerala, which is a popular beachside tourist destination.

T.P. Seetharam, India's ambassador to the UAE, said Indian diplomats had been dispatched to the airport and had met directly with many passengers.

"Many of them are in shock after such an event, and there may be minor bruises," he said in a telephone interview from Abu Dhabi.

He said that only one person - a crew member - had been taken to the hospital for treatment.

Officials from the airline and Dubai International Airport declined to immediately provide further details when reached by phone.

Fast-growing Emirates is the region's biggest carrier. The government-backed airline has a good safety record, with no other major accidents recorded since its founding in 1985.

It operates the world's largest airline fleets of the wide-body 777 and Airbus A380 long-haul aircraft.