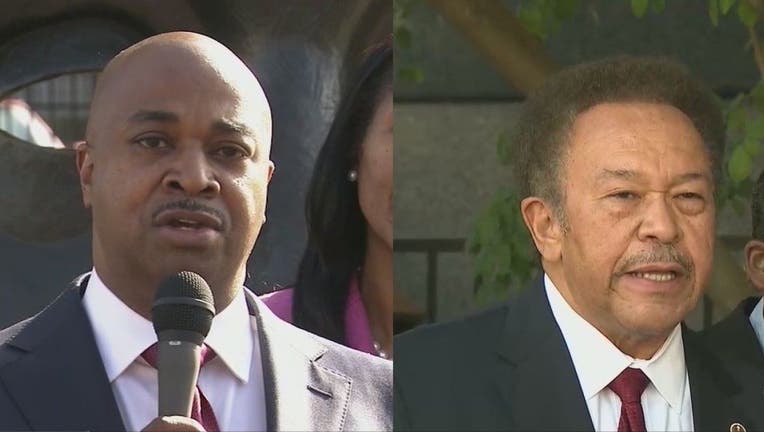 ATLANTA - Voters in Georgia's Fulton and DeKalb counties will head back to the polls starting Monday to choose who will fill the short remainder of the late John Lewis' term in Congress.

Monday was the start of early voting for the temporary position in Georgia's 5th Congressional District.

The finalists for the position are former Atlanta City Councilman Kwanza Hall and former Morehouse College President Robert Franklin, who advanced to a runoff after beating five other candidates in September's election.

The winner of the Dec. 1 runoff will serve about a month representing the Atlanta-centered district before being replaced by Democrat Nikema Williams.

Lewis died in July from pancreatic cancer after 17 terms in Congress. Because he died after winning the primary election, Georgia Democrats chose a new nominee without a primary, placing Williams, the party chair and a state senator, on the November ballot.

The race mostly revolved around the legacy of Lewis, whose history as a civil rights leader and international celebrity made him a standout in Congress. Candidates promised to work on big issues and bring a moral voice to Washington, despite the short term of the office.

Franklin, now a professor at Emory University, raised the most money of anyone running — almost $130,000, including $20,000 of his own. The 66-year-old promised to be a “moral voice amid ambiguity and fog.”

Hall, who lost a race for Atlanta mayor after three terms on the City Council, said he was called to the race by a sense of “personal obligation.” The 49-year-old said he would try to make the district a pilot site for efforts to fight COVID-19 and to spend more on infrastructure.

FOX 5 caught up with Kwanza Hall after the March on Washington about his running for U.S. House District 5. Hall served more than 10 years on the Atlanta City Council and ran for mayor in 2017. He came down with COVID-19 in early July and feared for his life, prompting him to call on everyone to take the pandemic seriously and wear a mask in public.

Voters in Fulton County can choose to place their ballots at the following locations:

DeKalb County has a single in-person early voting location at the DeKalb VRE office on the 4,300 block of Memorial Drive. However, residents can cast their vote by mail or use drop boxes at these locations:

For your designated polling place on Dec. 1, see the Georgia Secretary of State's My Voter Page.