DUNWOODY, Ga - There's a good chance you've been the target of a scam. Hopefully, you didn't fall for it, but many people do. Dunwoody police held a community meeting Thursday night to warn people about the latest scams, and talk about how not to be a victim.

"We did have a case where a victim was scammed out of over $300,000," said Dunwoody Police Officer Anwar Sillah.

The money was gone for good.  It had been sent to China. 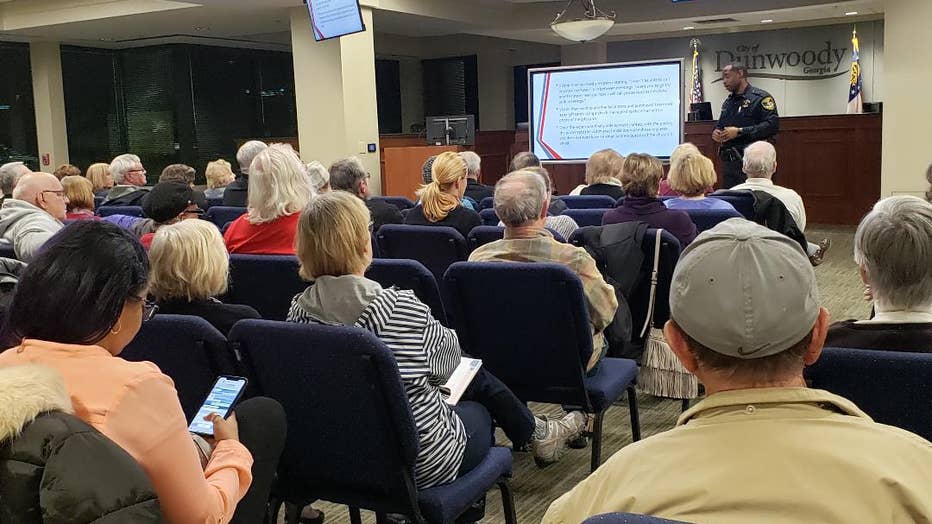 At a community meeting Thursday evening, Police talked about how scammers use technology to their advantage.  They can change what pops up on your caller ID, and can even pretend to be calling from the Dunwoody Police Department.

"When you think about it, anyone would fall for that! When the person on the other end says they're with Dunwoody PD and they owe the IRS "X" amount of dollars and they have to make this payment in order to refrain from going to jail," said Officer Sillah.

Con artists know a lot about you just by searching online, and they can play into your fears.

Marie Glover's husband got a call and was convinced their son was in jail. He was ready to pay bail.

"They made it believable, and you know you want to do anything for your child," said Glover.

Scammers out in full force

Dunwoody police are educating the public on scams

Corrine Sbaratta says she almost fell for the Georgia Power scam.  Pay up or the power gets cut off.

"They said that my payments were misdirected and in order to straighten it out, I had to send them money.  I almost fell for it, then I realized they don't shut your power off in a half an hour," said Sbaratta.

Police say ask questions and if you're still not sure if something is legit, talk to someone before sending payment. Officers also say if you're being pressured into paying with a gift card, don't do it.

"A gift card is made for gifts, not to make payments," said Officer Sillah.

Police say most people who get scammed don't report it, either because they don't realize they were scammed or they're embarrassed. Officers say it can happen to anyone, and they urge everyone to report the crime.