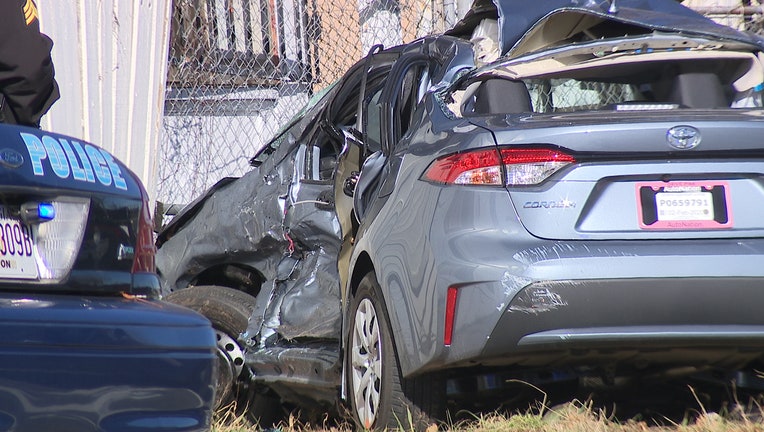 ATLANTA - A fatal crash claimed the life of an innocent driver Tuesday morning.

The collision happened around 8:30 at the intersection of Donald Lee Hollowell Parkway and Joseph E. Lowery Boulevard.

Police are trying to figure out why a driver sped away from officers, crashing their car and killing themselves.

According to the Georgia State Patrol, the Atlanta Police Department called them in to investigate the crash shortly after 9:15.  Troopers said a stolen, red Dodge Charger ran a red light and smashed into a Toyota Corolla.

"It sounded so bad," said one woman who works near the scene, but did not want to be identified.  "I just knew the person was dead."

Paramedics rushed the driver of the Corolla to Grady Memorial Hospital, where she died.  Late Tuesday, the Fulton County Medical Examiner's Office identified her as Trevania Allen, 55, of Atlanta.

Witnesses said two men and a woman ran from the Charger after the crash, including one man spotted on a nearby gas station's surveillance cameras in white pants and a black hoodie.

Some witnesses said there was an Atlanta police patrol car pursuing the Charger at the time of the crash, but Carlos Campos, Director of the APD Public Affairs Unit said that remains under investigation.

“The driver of the stolen vehicle involved in the fatal crash sped away from a marked patrol car when he noticed it pulling up behind him. We are conducting an internal investigation, which includes a review of available video, to determine if the officer chased the vehicle prior to the crash," Campos said in a statement to FOX 5.