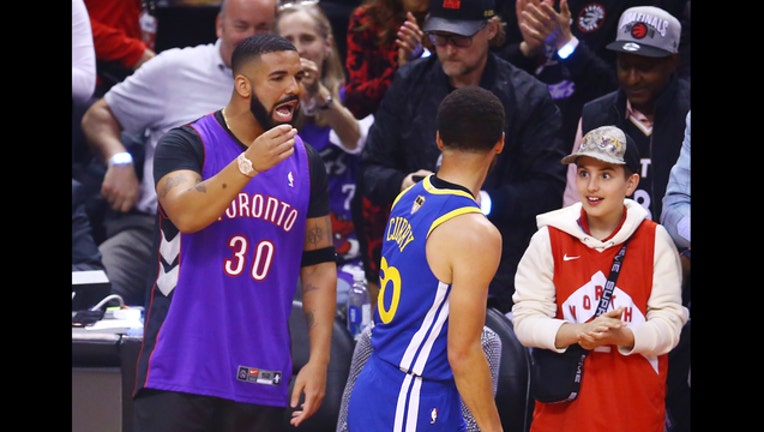 TORONTO, ONTARIO - MAY 30: Rapper Drake and Stephen Curry #30 of the Golden State Warriors exchange words during a timeout in the first quarter during Game One of the 2019 NBA Finals. (Photo by Vaughn Ridley/Getty Images)

TORONTO - After the Raptors’ 118-109 win in Game 1 of the NBA Finals on Thursday night, the rapper posted a video on Instagram of him jawing with Stephen Curry. That video included a shot of Drake reaching up to the guard’s hair and appearing to grab something.

Drake whose Instagram handle is "@champagnepapi" posted a video on social media showing him pick a piece of lint out of Warriors player Steph Curry's hair.

According to post the piece of lint is up for sale of Ebay. Drake posted a photo of a piece of lint with the caption, "Steph Curry hair lint for sale on my eBay right now!!! username: DraymondShouldntWear23".

During the Eastern Conference Finals which featured the Raptors, the NBA attempted to limit Drake's theatrics with players and coaches after Drake was seen massaging the shoulders of Raptors head coach Nick Nurse. NBA Commissioner Adam Silver said the league office had contacted Drake and his management team and asked him to not cross certain lines while he was seated courtside.