Police have a new warning about a TikTok trend finding its way into several schools in the metro Atlanta area. It is called the Devious Lick Challenge. Some students compete to see how much school property they can break or take. The stunt has landed two middle school students in handcuffs.

NEWNAN, Ga. - Two middle schoolers at Evans Middle School were arrested for allegedly busting up a school bathroom and posting it to social media. It’s part of a destructive trend, police and school administrators said.

The two kids allegedly ripped off a bathroom soap dispenser and clogged the toilet as part of what TikTok users call the "devious lick challenge."

Later, a school staffer found the soap dispenser in one of the student's backpacks, the Newnan Times-Herald first reported. 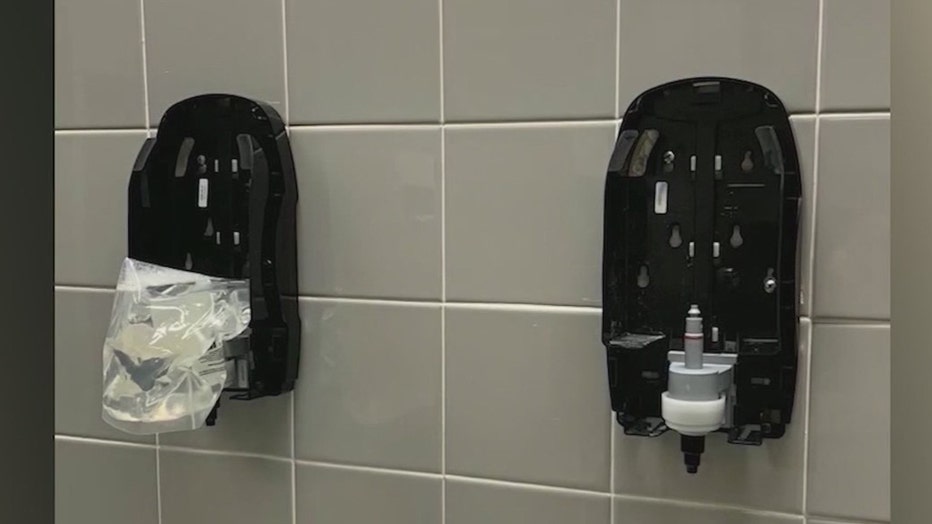 A student at Evans Middle School in Coweta County faces felony charges for an act of vandalism related to a new TikTok trend. (FOX 5 Atlanta)

Jackson said every single high school and middle school in Coweta County has been hit.

"We began hearing reports of other school systems in metro Atlanta but all over the nation of that happening, and really just as suddenly we found that happening in our middle and high schools as well."

In Gwinnett County, school staffers are now doing regular "restroom checks" throughout the day and are closely watching security camera footage, a spokesperson for the district told FOX 5.

After the latest incident at Twin Forks Middle School, the principal sent a letter home to parents.

"There is a cost associated with this and it puts an additional strain on our resources," the letter reads. "The custodians are bearing the brunt of it as they must clean up the messes. It has also impacted our leadership team members as we must now watch cameras and investigate every incident. This takes up valuable time."

Following the incident in Coweta County, one of the two students allegedly caught faces a felony charge.

"Soap dispensers or desks or windows or anything like that or government property," said Lt. Greg VanSant, a school resource officer with the Newnan Police Department. "Any defacing or vandalizing of that property is a felony."

Jackson, the district spokesperson, said the students have been quite easy to catch since they film themselves in the act and post it on social media for the world to see.

"The students are doing what the challenge ask them, which is that they take them home and put the stolen property on [social media]," Jackson said. "It’s fairly easy to find them at that point."

TikTok has banned the videos from its app, saying that they go against the community guidelines. However, students are finding their way around the ban by purposely misspelling the hashtag.

Lt. VanSant warned students that the stupid prank could result in some serious consequences.

"Don’t do something like this," he said. "It can really affect your future."