Jury selection resumed Friday in the trial of Derek Chauvin, the former Minneapolis police officer charged in the death of George Floyd, after Judge Peter Cahill ruled the trial will continue as scheduled and not be moved out of Hennepin County. Subscribe for more from FOX 9: https://bit.ly/3p5NDSU

MINNEAPOLIS (FOX 9) - Jury selection resumed Friday in the trial of Derek Chauvin, the former Minneapolis police officer charged in the death of George Floyd, after Judge Peter Cahill ruled the trial will continue as scheduled and not be moved out of Hennepin County. The trial is being streamed live, gavel-to-gavel, at fox9.com/live.

Court proceedings resumed at 8:15 a.m. Judge Cahill denied a request by Chauvin’s defense attorney, Eric Nelson, to delay the trial and move the trial out of Hennepin County over concerns regarding pretrial publicity. The trial remains on schedule to begin on March 29 with opening statements.

Cahill also ruled some of the evidence related to Floyd’s 2019 arrest, including a portion of the accompanying body camera video, is admissible at trial.

A 13th juror, a white woman in her 50s, was seated Friday morning. Juror No. 96 works for a business damaged in last year’s riots, not far from the MPD Third Precinct, but told the court it will not impact her ability to serve fairly on the jury. She also said she knew of the $27 million civil settlement.

Jury selection will continue next week, with Judge Cahill saying they would seek to seat two more jurors -- despite earlier indications that the court would seat 12 jurors with two alternatives for a total of 15. In a statement Friday evening, officials reiterated they could seat up to 16 people for the trial.

During the final minutes of Thursday’s court proceedings, Judge Cahill gave a stern warning to the attorneys on both sides as well as Minneapolis officials to stop talking about the settlement.

After an earlier back-and-forth over a press conference where Minneapolis leaders again discussed a civil settlement in the death of George Floyd, Judge Cahill pushed back against the prosecution's request for formal filings from the defense to support future motions.

City officials insist the settlement has not adversely impacted the trial at this point, despite the fact two seated jurors were dismissed earlier this week when they said word of the settlement damaged their ability to serve impartially.

Judge Cahill ruled Friday some evidence related to George Floyd's 2019 arrest, including a portion of the accompanying body camera video, is admissible in the trial of Derek Chauvin, the former Minneapolis police officer charged in Floyd's death.

Cahill said there is "some relevance" to Floyd’s prior arrest on May 6, 2019 because it shows an example of Floyd’s physical reaction to being confronted by police in a similar situation as his deadly arrest on May 25, 2020.

Trial Judge Peter Cahill ruled certain portions of George Floyd's arrest in 2019 will be admissible in the trial of Derek Chauvin, the former Minneapolis police officer charged in Floyd's death

The judge said a portion of the body camera video from the arresting officer will be allowed at trial, as well as Floyd’s blood pressure results at the scene, the suspected illicit drug pills in his car and his statements to the paramedic for the medical diagnosis.

"The whole point here is we have medical evidence on what happens when Mr. Floyd is faced with virtually the same situation: confrontation by police at gunpoint followed by a rapid ingestion of some drugs, we don’t know exactly how many but there was an admission that he had done it at the time of the stop," Cahill said. "That is medical evidence."

Floyd’s emotional behavior during the arrest, including crying out to his mother, is not admissible as evidence, Cahill ruled. 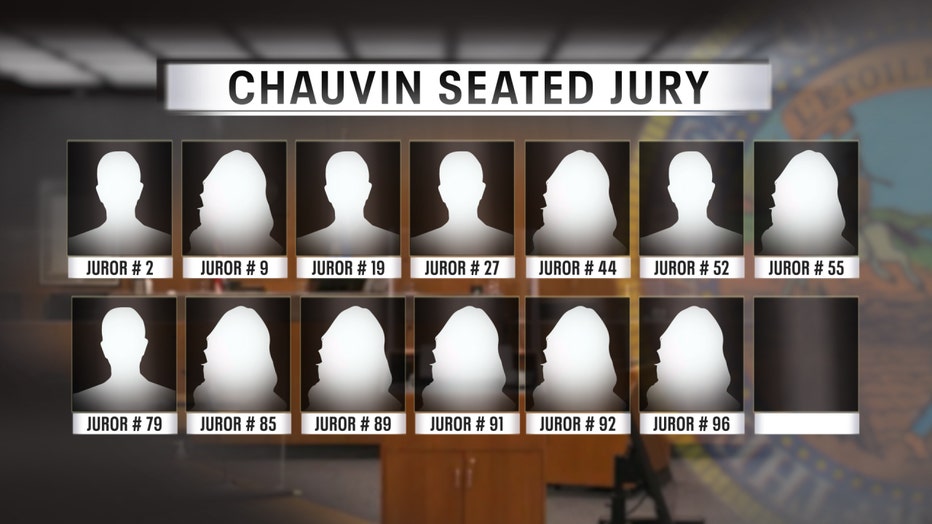 Thirteen jurors have been seated so far in the trial of Derek Chauvin.

Judge Cahill told the selected jurors to go home and not to do any reading or research about the case in the coming weeks. He told them to report back to the courthouse on March 29 at 9 a.m., saying he is confident the trial will begin at that time.

Recapping a day of subtractions and additions in jury selection

Wednesday started with two seated jurors being struck and ended with the addition of two more. Here is everything you need to know from Wednesday, March 17.

Each prospective juror was assigned a randomized number when they filled out the 14-page questionnaire, which asked them about their knowledge of the case, police connections and attitudes towards the justice system as well as their media habits.

GO DEEP: How the Chauvin trial jury will be selected

With the world watching a live video feed of the proceedings on the 18th floor of the Hennepin County Government Center, selecting a jury to decide the fate of former Minneapolis Police officer Derek Chauvin might seem like tedious minutia setting the stage for the courtroom drama to come. After nearly 50 years analyzing juries, Diane Wiley says that would be a mistaken assumption.

READ MORE: Who are the selected jurors?

Judge Cahill reinstated the third-degree murder charge against Chauvin during the first week of the trial.

Murder 3 back in Chauvin Trial, for now

Judge Peter Cahill reluctantly put the charge of Murder in the Third Degree back on the table Thursday for jurors in the trial of former Minneapolis Police officer Derek Chauvin.  The Minnesota Court of Appeals left him little choice.

The Chauvin trial will be live streamed, gavel to gavel, at fox9.com/live and the FOX 9 News App. You can also find the FOX 9 stream on Tubi through connected TVs. When the trial itself begins March 29, FOX 9 will broadcast it live on FOX 9 for the duration.

The trial of former Minneapolis Police Officer Derek Chauvin will be broadcast in full on FOX 9 starting March 29, including a quick recap of the day when court adjourns, followed by the FOX 9 News at 5.

To decide the jury, prosecutors and Chauvin’s defense attorneys will question each potential juror one at a time, separately from the others.

Each potential juror has already filled out a questionnaire asking about their knowledge of the case, police connections and attitudes towards the justice system as well as their media habits, which will be provided to the attorneys and the judge before jury selection.

Legal experts agree it will be a struggle to find an impartial jury and jurors who are willing to serve on the high-profile, high-stakes Derek Chauvin trial during a pandemic.

The jury will be partially sequestered during the trial and fully sequestered while they are deliberating, which means they cannot go home until they reach a verdict or the judge determines they are hung.  However, the judge can order full sequestration of the jury at any time if the partial sequestration proves ineffective in keeping the jurors free from outside influence.

Opening statements in the trial are scheduled to begin on March 29. A verdict in the Chauvin trial is not expected until mid to late April.

Who is in the courtroom?

Courtroom 1856 was renovated specifically for the Derek Chauvin trial to maximize capacity and maintain COVID-19 social distancing standards. The courtroom is located on the 18th floor of the Hennepin County Government Center.

A first look at the courtroom built on the 18th floor of Hennepin County Government Center where former Minneapolis Police officer Derek Chauvin will go on trial for the murder of George Floyd.

Judge Cahill has ordered certain behavior in the courtroom:

Jurors, attorneys, witnesses and support staff must wear masks and keep six feet from other people.

Masks can be removed when giving testimony, examining witnesses, giving opening statements or closing arguments. Attorneys must conduct all witness examinations and arguments from the lectern.

Any sidebar conferences will be conducted over wireless headsets. Chauvin will be outfitted with a headset to listen to these conferences, which will be off-the-record.

Jurors and potential jurors will be escorted to courtroom each day by deputies or security. No one can have contact with jurors except the judge, court personnel and deputies. Any attorney contact is limited to the jury selection process when court is in session.

Potential jurors will only be referred to by a randomized number.

George Floyd, 46, died on May 25, 2020 while being detained by Minneapolis police officers Derek Chauvin, Tou Thao, J. Alexander Kueng and Thomas Lane at the intersection of 38th Street and Chicago Avenue. The intersection has remained closed to traffic since Floyd's death and has been dubbed George Floyd Square. 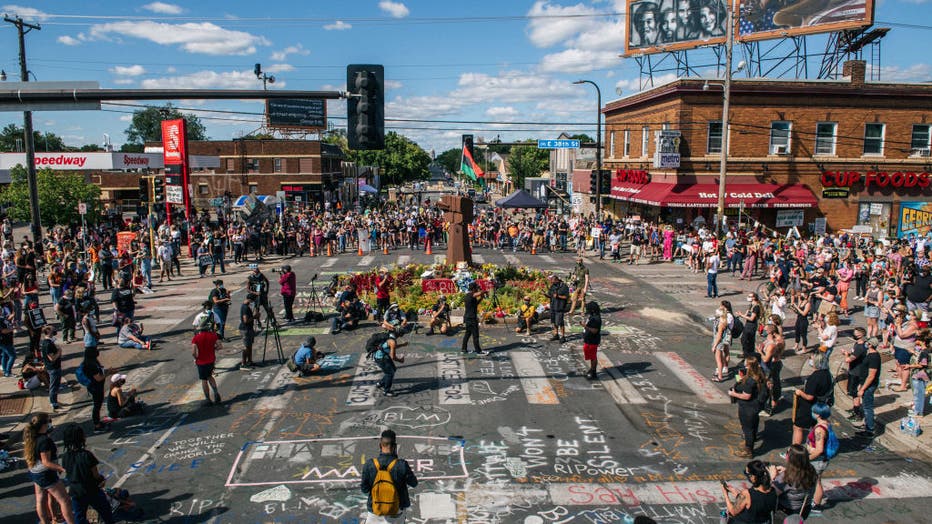 MINNEAPOLIS, MN - AUGUST 17: People participate in a demonstration on August 17, 2020 in Minneapolis, Minnesota. Community members came together for a rally to protest the city's potential forceful reopening 38th Street and Chicago Ave, an unofficial

A widely-shared video taken by a bystander showed Chauvin kneeling on Floyd’s neck for nearly nine minutes while he repeatedly cried, "I can’t breathe."

The Hennepin County Medical Examiner's report ruled the death of George Floyd a homicide. The updated report stated that George Floyd experienced a cardiopulmonary arrest while being restrained by law enforcement.