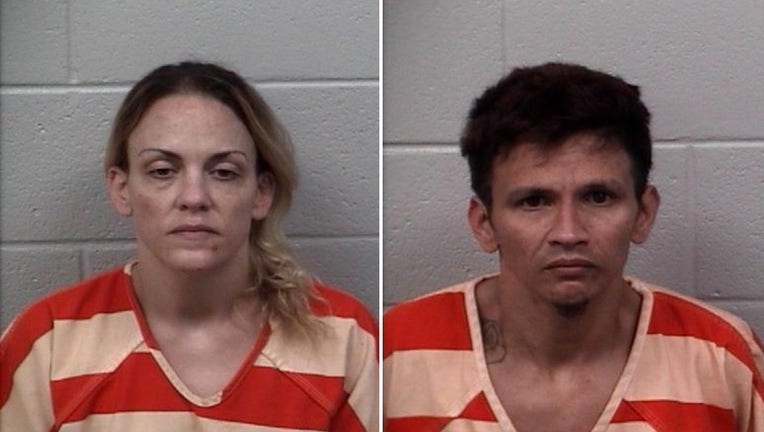 PAULDING COUNTY, Ga. - Deputies in Paulding County have arrested two suspects in an investigation into identity theft that affected multiple businesses and residents of the county.

Officials say the investigation began on Tuesday, July 13 when deputies responded to a motor vehicle accident of Laird Road. The driver, identified as 41-year-old Kelley Marie Faulkner, had to be transported to the hospital for her injuries.

While investigating the accident, deputies say they found 10 fraudulent driver's licenses and over 60 fraudulent checks inside of Faulker's car.

The discovery led to the search of Faulker's home. There, officials say they found evidence that she was making fake driver's licenses and found a passport, more checks, gift cards, suspected methamphetamine and oxycodone pills, and a firearm. Deputies say they also found multiple pieces of lawn equipment that they believe were either stolen or purchased fraudulently.

After learning that several items had been bought with counterfeit checks, deputies returned to the home and found many other items they believe were obtained fraudulently.

Detectives say that they are still trying to locate victims in the case, which has already cross multiple jurisdictions. In total, checks from 12 different banks have been identified.

If you have recently had an issue with a check coming through your bank that you did not write and believe you are a victim, please contact the Criminal Investigations Division of the Paulding County Sheriff’s Office at (770) 443-3015.